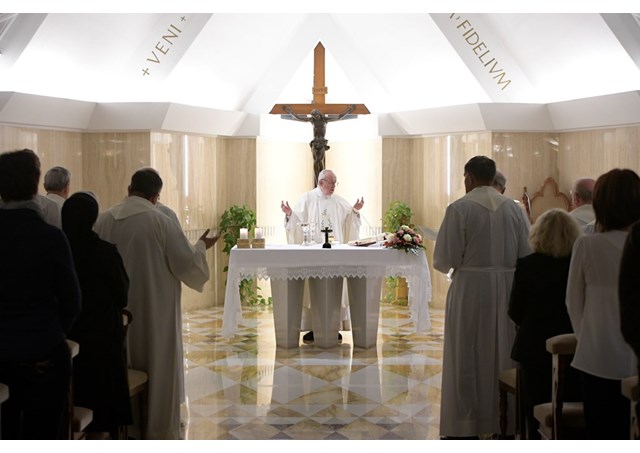 (Vatican Radio)  In these times, with much calamities and injustice on the media, especially regarding children, let us raise an earnest prayer that God convert the hearts of men to be able to know the Lord and not worship money as God.   This was the exhortation of the Pope Francis in his homily at Mass, Monday morning, in the chapel of the Santa Marta residence in the Vatican.

Taking his cue from the parable in Luke’s Gospel, where the rich fool worshipped money as God, the Pope reflected on the vanity of putting trust in earthly goods rather than in the true treasure of relationship with the Lord.  Despite an abundant harvest, the greedy man thinks of expanding his storehouses.  “Dreaming of a long life”, the Pope said, “he thinks of having more goods to the point of nausea, and not being satisfied, he enters into a spiral of "exasperated consumerism.”

The Pope said, “it is God who puts a limit to this attachment to money.”  A man enslaved by money is not a tale invented by Jesus, the Pope explained, adding it is true even today, where many live adoring money. The life of those who accumulate riches for themselves, has no meaning, he said.  They don’t know what it means to be rich in God.   In this regard, he recalled an episode of a wealthy businessman in Argentina who despite being seriously ill, stubbornly went on to buy a villa without thinking instead that he would have to present himself before God shortly.

Even today, there are these people hungering for money and earthly possessions, the Pope lamented,  people who have "a lot" compared to "the hungry children who lack medicines and education and who are abandoned".  This, the Pope pointed out, is an "an idolatry that kills", that “sacrifices human beings”.  "This idolatry starves many people to death,” Pope Francis stressed, citing the case of 200,000 Rohingya children out of 800,000 people in refugee camps, who hardly eat and are malnourished, without medicines.  This is happening today, the Pope said, and not something of Jesus’ time. In the face of this, the Pope urged for an earnest prayer: “Lord,  please touch the hearts of these people who worship God, the God of money. Touch also my heart so that I don’t fall into that and know how to see.”

Another consequence of this greed, the Pope pointed out, is war, including also in the family.  He spoke about what happens in a family when it is the question of inheritance.  Families are divided and end up in hatred, one against the other.  The Pope said that at the end of it all, the Lord gently reminds us that the only road to enriching oneself is in the Lord.  “Wealth is only in God,” the Pope said, adding, this does not mean scorning money. “No,” he said, “it is greed, as the Lord says. Living attached to the God of money.”  This is why, the Pope said, our prayer must be strong, seeking in God the solid foundation of our existence.