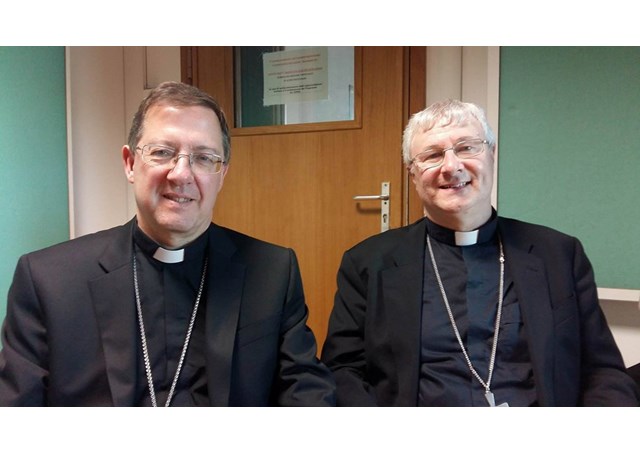 (Vatican Radio) Catholic and Methodist theologians wind up a meeting at the weekend that has been marking the 50th anniversary of their first ecumenical dialogue group, established in the wake of the Second Vatican Council. The first session of the Methodist-Roman Catholic International Commission was held in the hill town of Ariccia in October 1967.

Pope Francis met with members of the current Commission on Thursday, saying that half a century of dialogue has freed us “from estrangement and mutual suspicion”, helping us to recognize each other “as brothers and sisters in Christ”.

To find out more about the achievements of the past half century, Philippa Hitchen spoke to Bishop John Sherrington, Catholic co-chair of the dialogue commission, and to his Methodist counterpart, Rev Dr. David Chapman..

Dr. Chapman says that among the key achievements are a convergence in understanding of the faith of the apostles, the sacraments, and “the way in which the Spirit has guided the Church authoritatively throughout the centuries”. While there are outstanding differences, he says, our understanding “of teaching authority, the nature of revelation and faith are all solid achievements”.

Bishop Sherrington says a major cause for celebration is the “way in which we’re no longer strangers, but pilgrims travelling  together, members of God’s household”, learning to overcome differences and sharing great unity in much  of our mission as followers of Christ.

Gifts of Methodism to wider Church

Rev Chapman says a major achievement of the Methodism movement in 18th century was “to encourage a serious attention to the claims of Christian discipleship in holy living” building on the support of small groups. This has been one of the gifts of Methodism to the wider church, he says and the teachings of the Second Vatican Council showed “a great convergence in Christian life as understood as growth in grace and holiness”.

Bishop Sherrington notes the renewal in the Catholic Church’s on the role of scripture echoes John Wesley’s focus, learning to explore and study in small groups.  Also, he says, the way some new movements live their fellowship is an insight from John and Charles Wesley. And most importantly, he adds, the focus on social holiness, working for justice with the poor and marginalized has helped revitalise the Catholic Church’s social teaching.

While both men point to the challenges of order and ministry, including the ordination of women, they believe there is “a lot we can do together” in mission and  daily living.

The Methodist Roman Catholic International Commission commenced its 11th session of dialogue at Villa Palazzola, Rome on Sunday 15th October 2017 and met for one week. The highlight of the week was the celebration of the 50th anniversary of the work of the Commission on Thursday 19th. After Mass at the altar of the tomb of St. Peter and a visit to his tomb in the scavi, members of the Commission were received by Pope Francis, along with the Steering Committee of the World Methodist Council, in audience in the Clementine Hall of the Apostolic Palace.

Bishop Sherrington, Catholic Co-Chair said, “At the tomb of St. Peter, it was deeply moving to pray together as Methodists and Catholics the ‘Our Father’ and recognise our common roots. The audience with the Holy Father was a wonderful meeting during which Pope Francis affirmed the work of the dialogue, appreciated the fruits it has produced and encouraged our work for the future to continue to grow in holiness and unity. We presented him with a Spanish translation of our last document ‘The Call to Holiness” with which he was delighted. Many members spoke later of the Holy Father’s profound humility and the respect with which he greeted them.”

The day of celebration continued with a seminar at the Centro pro Unione at which Mrs. Gillian Kingston and Dr. Clare Watkins presented stimulating papers on the fruits of the joint work and challenges for the future. A reflective  discussion followed with responses from Dr. David Chapman and Bishop John Sherrington. The day ended with Vespers at Caravita and a reception hosted by the British Ambassador to the Holy See, HE Sally Axworthy, MBE.

During the week the Commission discussed papers on the theme of ‘God in Christ Reconciling’ including focus on the scriptures and reconciliation, Church experiences of reconciliation, the healing of memories and the mission to be ambassadors of reconciliation working for justice, peace and integrity with creation. Bishop Sherrington commented, “The international experience of the Commission members has been enriched by new members from Africa and India  as well as Canada and Australia. This enables the Commission to be more aware of the ways in which culture impacts on the Christian life in diverse situations.I wish to express my gratitude to the Pontifical Council for Promoting Christian Unity and the World Methodist Council for their sponsorship of our work of dialogue.”

Next year the Commission continues its discussions in Hong Kong to which we all look forward.