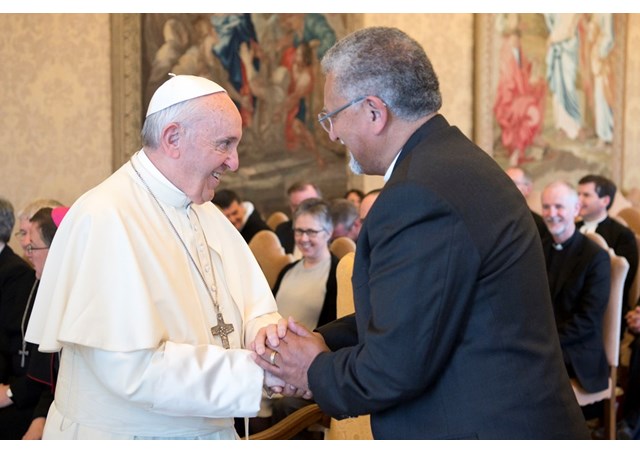 (Vatican Radio) Methodist and Catholic theologians are meeting just outside Rome this week, marking the 50th anniversary of the first ecumenical dialogue group following the Second Vatican Council. That first session of the Methodist-Roman Catholic International Commission was held in the hill town of Ariccia in October 1967.

Pope Francis met with members of the current Commission on Thursday, together with leaders of the World Methodist Council, saying that half a century of dialogue has set us free from estrangement and suspicion and helped us to recognize each other as brothers and sisters in Christ.

South African Bishop Ivan Abrahams is General Secretary of the World Methodist Council. He talked to Philippa Hitchen about the concrete fruits of this ecumenical journey….

He says two of the key ingredients that have marked this “50 year pilgrimage or journey” are the love and trust that has been built up and that are reflected in the seven joint reports that have been produced thus far.

One of the great challenges, he says, is to let the fruits of this dialogue “percolate to the local level and we need to see how we can do that much more effectively”.

'That they may be one'

He notes that the latest dialogue report entitled ‘A Call to Holiness: from glory to glory’ stresses that working for unity is “a fundamental part of our mission and our witness to the world, to see that Jesus’ high priestly prayer is made reality”.

Speaking about the situation in his native South Africa, Abrahams says that as he saw the demise of apartheid in his lifetime, “I’d hoped to see the reality of “that they may be one” in my lifetime”.

Autonomy in mission and witness

Talking about the Methodist model of governance, he says there’s no compromise on key issues of faith, but “we don’t apply the ‘one size fits all’ model”, leaving the various conferences autonomy to make their own decisions about mission and witness.

Asked about Pope Francis’ efforts to give local Catholic bishops’ conferences with more autonomy over pastoral decision making, Abrahams says “I think that it is really the only way to go, if we speak about the integrity of the Gospel, because every cultural context is uniquely different”.

While practical cooperation on issues like migration, refugees or climate change are important, he says, consensus in the theological dialogue remains crucial because “we need to clarify so we can walk together”.

Finally Bishop Abrahams praises Pope Francis’ way of reaching out to young generations, saying he is “a beacon of hope” and “somebody who embodies the unity that we’re seeking to live”.