Pope Mass: The gift of God's salvation opens the door to all 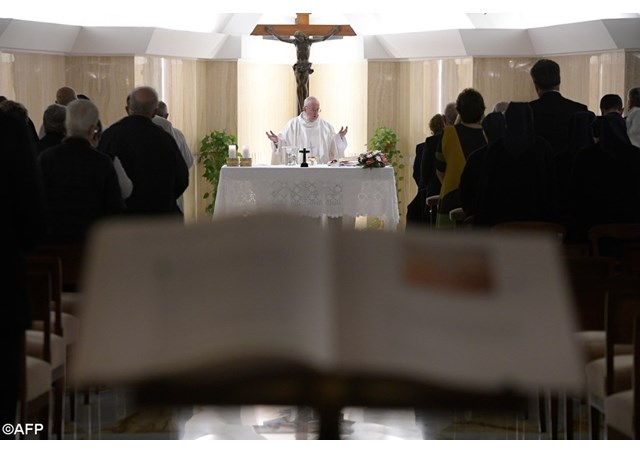 The Lord gives us the memory of  God's salvation which is “a gift” and close to the concreteness of the works of mercy he wants us to do, whether they are "material or spiritual": so we will become people who help to "open the door" to ourselves and others. That was Pope Francis’ prayer at morning Mass at the Casa Santa Marta. Recalling the passage from Luke's Gospel in which the Scribes and Pharisees considered themselves righteous, and Jesus makes known to them that God alone is just, the Pope explained why law practitioners had "taken knowledge away" with "the consequence of not being able to enter the Kingdom nor let others enter either".

Therefore, this gift was "forgotten". It is "God's initiative to save us and instead stand on the side of the law": Salvation - said the Pope - "is there for them", thus arriving in "a bunch of prescriptions" which in fact become salvation. So, "they do not receive the power of God's righteousness." The law, however, is always "an answer to God's generous love", which has taken "the initiative" to save us. And, continued Pope Francis, "when you forget the gift of salvation you fall, you lose the key to the intelligence of the history of salvation", losing "the sense of God's closeness":

"For them, God is the one who has made the law. But this is not the God of revelation. The God of revelation is a God who has begun to walk with us from Abraham to Jesus Christ, God walking with His people. And when you lose this close relationship with the Lord, you fall into this dull mindset that believes in the self-sufficiency of salvation with the fulfillment of the law. The closeness of God ".

When the closeness of God is lacking, when prayer is lacking, the Pope emphasized "doctrine cannot be taught" and not even by "studying theology", much less "moral theology": The Pope reiterated that theology "kneels down, always close to God ". And the closeness of the Lord comes "to the highest point of the crucified Jesus Christ," being "justified" for the blood of Christ, as Saint Paul said. For this reason, the Pontiff explained, the works of mercy "are the stone of the fulfillment of the law," because they touch the flesh of Christ, "touch Christ’s suffering in a person, both corporally and spiritually." Also, when the key to knowledge is lost, one also becomes "corrupt". The Pope finally noted the "responsibilities" of shepherds, now in the Church commenting that  when they lose or take away the "key of intelligence", they close  "the door on themselves and on others":

In my country, said the Pope,  "I have heard several times of parish priests who did not baptize the children of the mothers because they were not born in  canonical marriage. They closed the door, why? Because the heart of these parish priests had lost the key to knowledge.

Three months ago, in a country, in a city, a mother wanted to baptize her newly born son, but she was married civilly with a divorced man. The priest said, 'Yes, yes. Baptize the baby. But your husband is divorced. So he cannot be present at the ceremony. ' This is happening today. The Pharisees, doctors of the law are not people of the past, even today there are many of them. That is why we need prayers for us shepherds. To pray that we do not lose the key to knowledge and do not close the door to ourselves and the people who want to enter. "