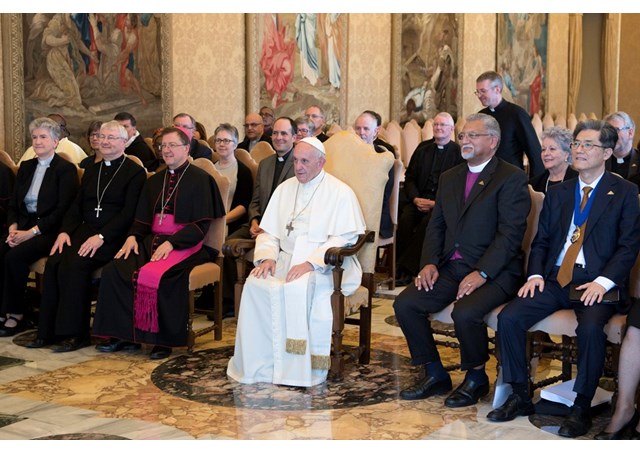 (Vatican Radio) Pope Francis met with leaders of the World Methodist Council on Thursday, celebrating fifty years of dialogue between the two Churches.

Noting that in the Old Testament, a golden jubilee was a moment to set slaves free, the pope said “we too have been freed from the slavery of estrangement and mutual suspicion”.

After fifty years of patient dialogue, he said, “we are no longer strangers” but rather, through our shared Baptism, “members of the  household of God”.

True dialogue, the pope continued, gives us courage to encounter one another in humility and sincerity” as we seek to learn from each other.

Speaking about the 18th century preacher John Wesley, who, with his brother Charles founded the Methodist movement, Pope Francis said his words and his example of holiness brought many people to Christ. When we recognize the working of the Holy Spirit in other Christian confessions, he said, “we cannot fail to rejoice”, as they can “also help us grow closer to the Lord”.

Serving the poor together

The pope also noted how our faith becomes tangible when it takes the concrete form of love and service to the poor and marginalized. As Methodists and Catholics together, when we assist those who are alienated or in need, he said, we are responding to the Lord’s summons.

We cannot grow in holiness without growing in communion, Pope Francis concluded. As you begin a new phase of dialogue devoted to reconciliation, may your discussions be a gift for Christians everywhere to become ministers of reconciliation. Let us prepare ourselves with humble hope and concrete efforts, he said, for that full recognition which will enable us to join one another in the breaking of bread together.