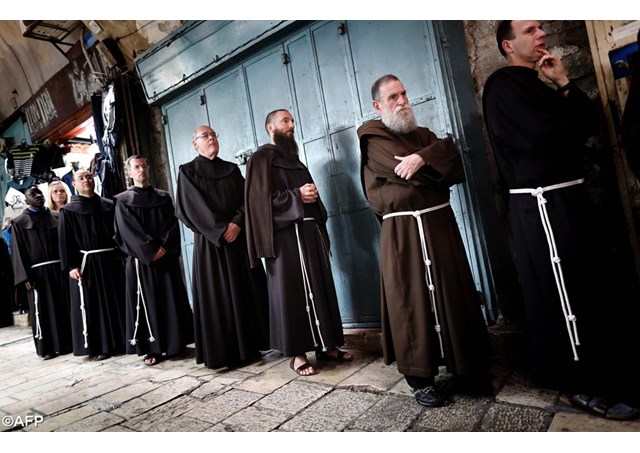 (Vatican Radio) Pope Francis has sent a letter to the Franciscan Custody of the Holy Land marking the 800th anniversary of their presence as guardians of the holy sites in modern day Israel and Palestine.

In the letter, published on Tuesday, the pope praises the Franciscans for their vital contribution to life in the Holy Land, in particular their work to accompany pilgrims coming from all over the world.

The Pope recalls the way that Saint Francis, in May 1217 during the chapter of his recently founded order, decided to send the friars out on mission. The first missionaries to the Holy Land arrived that summer in the town of Acre, near Haifa, in northern Israel and just over a hundred years later, Pope Clement VI confirmed them as the custodians of the holy places.

In the message, Pope Francis notes how the Franciscans live alongside people of different cultures and religions, sowing seeds of “peace, fraternity and respect”. As well as their work as guides for pilgrims, the Pope recalls, they are also committed to biblical and archaeological studies. Franciscans also work closely with the local Churches taking care of the poor, the sick, the elderly and the young people who find it hard to keep up hope amidst the ongoing conflict.

Collection for the Holy Land

The Pope says that the Franciscans are ambassadors for the whole people of God, who support them through the traditional Good Friday collection for the Holy Land and through the Vatican’s Congregation for Oriental Churches, which is currently marking the centenary of its foundation.