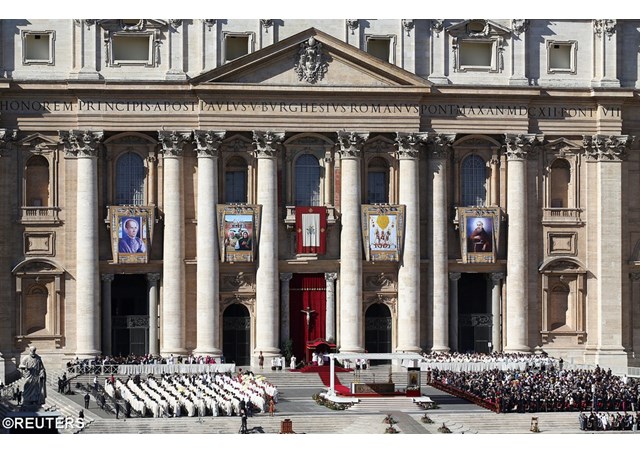 (Vatican Radio) Inviting all faithful to practice Christian love every day, Pope Francis on Sunday canonized 35 new saints, nearly all of them martyrs, holding them up as models who “point the way”.

To the over 35,000 pilgrims gathered in St. Peter’s Square for the Canonization Mass, the Pope said “They did not say a fleeting ‘yes’ to love, they said ‘yes’ (to God's love) with their lives and to the very end”.

Those canonized included thirty martyrs, both priests and lay persons, who suffered anti-Catholic persecution in 1645 at the hands of Dutch Calvinists in Brazil, while three indigenous children in 16th century Mexico were martyred for refusing to renounce their Catholic faith and return to their ancient traditions. The other two new saints are a 20th-century priest from Spain and an Italian priest who died in 1739.

The Lord's desire for a true communion of life with us

The Pope’s homily inspired by the Parable of the Wedding Banquet speaks of the Lord’s desire for a true communion of life with us, a relationship based on dialogue, trust and forgiveness.

“Such, he said, is the Christian life:  a love story with God.

We are all invited, Francis said, and no one has a better seat than anyone else.

“At least once a day, he continued, we should tell the Lord that we love him” because once love is lost, the Christian life becomes empty.  It becomes a body without a soul, an impossible ethic, a collection of rules and laws to obey for no good reason.

Every day is a wonderful opportunity to say 'yes'

“We are the beloved, the guests at the wedding, and our life is a gift, because every day is a wonderful opportunity to respond to God’s invitation” he said.

But he added, the Gospel warns us that the invitation can be refused.  Many of the invited guests said no, because they were caught up in their own affairs.

"They were more interested in having something, he explained,  rather than in risking something, as love demands: this is how love grows cold, not out of malice but out of a preference for what is our own: our security, our self-affirmation, our comfort…"

The temptation of settling into the easy chair of profits

And the Pope warned Christians against the temptation of “settling into the easy chair of profits, pleasures, or a hobby that brings us some happiness.  And we end up aging badly and quickly, because we grow old inside.  When our hearts do not expand, they become closed in on themselves”.

He said the Gospel asks us then where we stand: “with ourselves or with God?  Because God is the opposite of selfishness, of self-absorption.  The Gospel tells us that, even before constant rejection and indifference on the part of those whom he invites, God does not cancel the wedding feast. He does not give up, but continues to invite.  When he hears a “no”, he does not close the door, but broadens the invitation.  In the face of wrongs, he responds with an even greater love”.

Love is the only way to defeat evil

This is what love does, the Pope said, because this is the only way that evil is defeated.

And inviting us all to live in true love and “practice” love every day, Francis said “the Saints who were canonized today, and especially the many martyrs, point the way: They did not say a fleeting ‘yes’ to love; they said they ‘yes’ with their lives and to the very end”.

At Baptism, he concluded, we received a white robe, the wedding garment for God: Let us ask him, through the intercession of the saints, our brothers and sisters, for the grace to decide daily to put on this garment and to keep it spotless” by approaching the Lord fearlessly in order to receive his forgiveness”.

“This is the one step that counts, for entering into the wedding hall to celebrate with him the feast of love” he said.

Who the new saints are

The newly-declared saints include 30 so-called “Martyrs of Natal,” who were killed in 1645 in a wave of anti-Catholic persecution by Dutch Calvinists in Natal, Brazil.

Also from Latin America was a group of three indigenous martyrs from Mexico - Cristobal, Antonio and Juan - known as the “Child Martyrs of Tlaxcala.” Aged between 12 and 13, they were among the first indigenous Catholics of Mexico, murdered between 1527 and 1529 for refusing to renounce their faith and return to their ancient ‎traditions.‎

And then there are Father Faustino Miguez, a Spanish priest who lived in the 19th and 20th centuries, and Father Angelo d‘Acri, an Italian itinerant preacher who died in 1739 after serving in some of the most remote areas of southern Italy.

Announcement of Special Assembly of Synod of Bishops for the Amazon

After the Mass, Pope Francis recited the Angelus prayer and announced a  Special Assembly of the Synod of Bishops for the Pan-Amazon regionm to take place in October 2019.