Pope Francis: Do not distance yourself from South Sudan 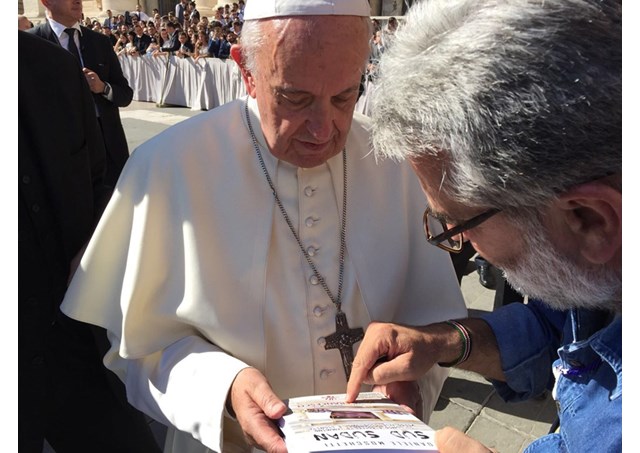 (Vatican Radio) Pope Francis has called on the international community not to forget South Sudan and in particular the serious humanitarian emergency unfolding there.

The Pope made the call on South Sudan in a Preface he wrote to a new book on South Sudan. The book, published in Italian, is authored by Comboni Missionary, Father Daniele Moschetti. It was launched over the weekend, in Italy, Rome.

“Usually Missionaries are the ones to tell (the world) about lives lived on the periphery on behalf of the poor. So too is this testimony of Father Daniele Moschetti, a Comboni missionary, who offers a compelling account of the generous and passionate commitment of so many missionaries living side by side with those in need and, above all, of those who suffer because of ongoing conflicts that cause death and destruction,” Pope Francis wrote in the Preface.

Pope Francis has implored the international community, and everyone who believes in the Gospel not to give-up on South Sudan because to do so would be to betray the lesson of the Gospel.

“I feel the importance and need of raising this kind of awareness in the international community on a silent drama, which requires everyone's commitment to a solution that would end the ongoing conflict. To distance one’ self from the problems of humanity, especially in a context such as that which afflicts South Sudan, would be to "forget the lesson from the Gospel about the love of neighbour suffering and in need," the Holy Father emphasised.

The book, “South Sudan: The Long and Sorrowful Path towards Peace, Justice, and Dignity,” published in Italian as “Sud Sudan: Il lungo e sofferto cammino verso pace, giustizia e dignità” is a collection of Moschetti’s personal experiences of a land in which he lived and one to which he is still attached. It is part diary; part missionary chronicle and commentary. The book is a rich account of information which tackles a very complicated conflict while avoiding a patronising or know-it-all attitude.

Moschetti provides much-needed context often lacking in the usual 140 twitter character headline. More importantly, the book is an attempt to break through, in a personal way, and draw attention to a forgotten but real humanitarian emergency taking place right under our averted gaze. Moschetti is concerned that, in mainstream Western media,  migration and African conflicts are often portrayed in a distorted or simplistic manner.

An Italian Comboni Missionary priest, Fr. Moschetti studied Theology in Nairobi and worked for 11 years, as a missionary, in the Kenyan slums of Kibera and Korogocho. Between 2009 to 2016 Fr. Moschetti was assigned to South Sudan.

During Moschetti’s book launch, at Radio Vatican, another Comboni Missionary and renowned journalist, Fr. Giulio Albanese described South Sudan as a forgotten nation. His hope is that one day Pope Francis visits South Sudan and perhaps help focus the world’s attention on this troubled country –just as he did for the Central African Republic in 2015. In an unprecedented move, Pope Francis launched the Jubilee Year of Mercy in Bangui, Central African Republic, in November 2015.

Notwithstanding the odds in South Sudan, Fr. Albanese spoke of a civil society that actually exists there is trying to make a difference. He said civil society activists there need the support of the international community.

During the Wednesday Papal audience of 11 October, in Saint Peter's Square, Moschetti gave Pope Francis a copy of his book. The Pope told Moschetti: “I really would like to go to this country (South Sudan). I would like to go there as soon as it is possible.”