Pope urges Christians to watch out against worldliness 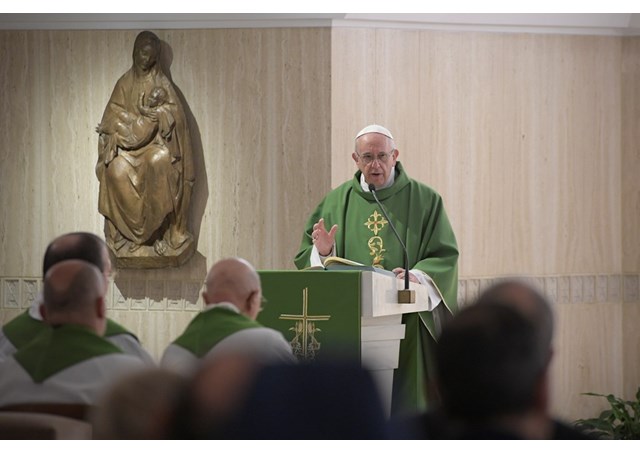 (Vatican Radio)  Only Christ crucified will save us from the demons that make us "slide slowly into worldliness", saving us also from the "stupidity" that St. Paul talks about to the Galatians, and from seduction.  This was central message of the homily of Pope Francis at his Mass, Friday morning, at the Santa Marta residence in the Vatican.  He was reflecting on the episode in Luke’s Gospel where Jesus casts out a demon, which some people interpret as through power of the devil.

The Pope said the Lord asks us be watchful in order not to enter into temptation.  This is why a Christians have to be awake, watchful and careful like a sentinel.  Jesus was not narrating a parable but was stating a truth, i.e when the unclean spirit comes out of a man, he roams about in abandoned places looking for refuge and not finding any, decides to return to where he came from, where the freed man lives.  Hence the demon decides to bring in "seven other spirits worse than him.”  Pope Francis emphasized the word “worse”, saying it has much force in the passage because the demons enter quietly.

The demons thus start being part of the man's life. With their ideas and inspirations, they help the man to live better and entering his life and heart and start changing him from within, but quietly without making any noise.  This method is different from the earlier diabolic possession which was strong, the Pope explained, adding this time it a diabolic possession, something like in a “living room”.  The devil slowly changes our criteria to lead us to worldliness. It camouflages our way of acting, which we hardly notice. And so, the man, freed from the demon, becomes a bad man, a man burdened by worldliness. And that's exactly what the devil wants – worldliness, the Pope stressed.

Worldliness, Pope Francis explained, is a spell, a seduction, because the devil is the "father of seduction". When the devil enters "so sweetly, politely and takes possession of our attitudes," the Pope said, our values pass from the service of God to worldliness. Thus we become "lukewarm Christians, worldly Christians", a mixture, something that the Pope described as a “fruit salad” of the spirit of the world and the spirit of God.  All this distances us from the Lord, the Pope said and stressed that the way to avoid it by being vigilant and calm without alarm.

Watchful means understanding what goes on in my heart, the Pope said, adding, “ It means stopping for a while to examine my life, whether I a Christian, whether I educate my children, whether my life is Christian or worldly?” And one understands this, as Paul points out, by looking at Christ crucified.  One understands where worldliness lies and is destroyed before the Lord's cross.  The Crucifix saves us from the charms and seductions that lead us to worldliness.

The Holy Father exhorted Christians to examine themselves whether they look up to Christ crucified, whether they pray the Way of the Cross in order to understand the price of salvation, not just from sins but also from worldliness.  The examination of conscience, the Pope said, is done always before Christ crucified, with prayer, after which one has to break loose from one’s comfortable attitudes, through works of charity, visiting the sick, helping someone in need and so on.  This breaks the harmony and the spiritual worldliness that the demon together with seven others tries to create in us, the Pope added.