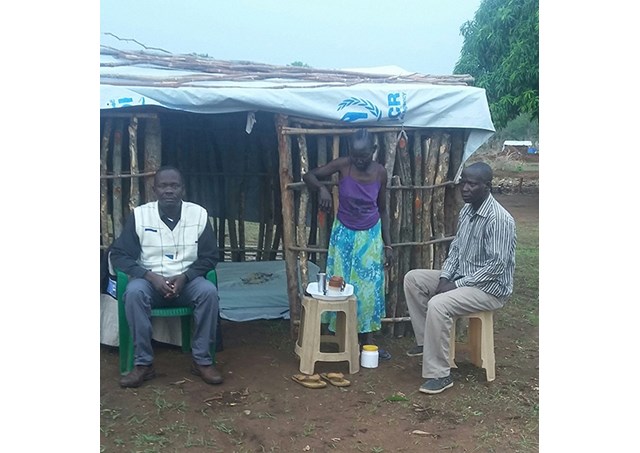 Fr. Alex Lodyong Eyobo is a student of Biblical Theology at one of Rome’s Pontifical Universities. He is a priest from Yei Diocese in South Sudan.

“Practically, all my family members are in northern Uganda in a refugee camp since January 2017. If I have to see my family, I go to the refugee camp. I was last there in April, this year, during our Easter holiday. It means; therefore, I am also a refugee though technically not registered as one in Uganda,” said Fr. Eyobo.

His family’s exodus from South Sudan’s Kajokeji county happened early this year when a conflict between one of South Sudan’s many rebel groups and government forces spiralled out of control engulfing the whole town. Everyone fled with whatever little they could carry.

“There is nobody left in Kajokeji. If there are any civilians still there, they are probably hiding in the bushes. Within the town areas, there is nobody. There are only soldiers and maybe the Police,” Fr. Eyobo said.

Once Fr. Eyobo’s family crossed into Uganda, they were eventually offered space in one of Uganda’s many refugee camps. Their new home was a tiny piece of land with a tree as the only shelter against the elements.

“The general situation of people in Uganda’s refugee camps is dire. When my family members reached the refugee camp, they were shown a forest for them to prepare and settle in. In the first days, they lived under a tree. After some time, they were given some tents so that they would have some cover over their heads. When I was there in April, and even today, the food rations were never enough because of the large number of people in the camps. Each family eats once a day – a ration of beans and some cereal such as Maize meal. Health facilities are non-existent. There are no schools for children,” Fr. Eyobo said.

According to the United Nations High Commissioner for Refugees (UNHCR), the number of South Sudan refugees in Uganda alone now stands at over one One million persons at 1 September 2017.  The significant number of refugees in Uganda is taking a toll on the locals, but up to now, they have nonetheless been welcoming.

Fr. Eyobo’s family are grateful for the generosity of Ugandans, the various Church organisations and aid agencies trying to alleviate suffering in the camps and offer some kind of service and food.

The story of Fr. Eyobo’s family is not unique. They are simply part of a larger drama and conflict that started in December 2013 when the President of South Sudan Salva Kiir fell out with his then Vice President, Riek Machar leading to an unprecedented power struggle and armed conflict between two armed groups loyal to Salva Kir or Riek Machar. Ordinary people have borne the brunt of this conflict. Several thousand have died; many are internally displaced while others have fled as refugees to neighbouring countries, especially to Uganda.

Asked what word he would have for South Sudan’s Riek Machar and Salva Kiir, Fr. Eyobo has only one message: "Stop the war because people are suffering.”

He then adds, “Salva Kiir and his former deputy Riek Macha should sit down to together and have a meaningful discussion for the sake of peace in the country. People will go back to their country when there is peace. There is no need for counter-blame. Mr. Kiir and Dr. Machar should feel the suffering of the people. If they did feel that,  I believe they would stop the war,” Fr. Eyobo emphasised.