Pope at Mass: 'God's omnipotence is manifested in His mercy' 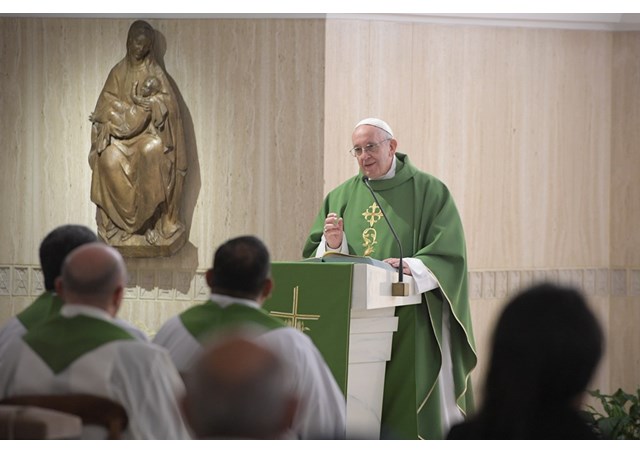 (Vatican Radio)  Pope Francis on Tuesday reminded the faithful that God’s infinite mercy prevails over all, but he warned against rigidity and invited Christians to always open their hearts.

The Pope was speaking during morning Mass at the Casa Santa Marta.

Listen to the report by Linda Bordoni

Reflecting, for the second consecutive day, on a reading from the Book of Jonah, Pope Francis concluded that it is God’s mercy that opens our hearts and wins over everything.

Recalling the story of the prophet Jonah whom – he said – “was a stubborn man who wanted to teach God how to do things” he described him as “sick with rigidity”, “a starved soul”.

In the Bible story, the Pope said, the Lord asks Jonah to convert the city of Nineveh. First the prophet refuses to do so and runs away; then he carries out God’s orders “and he does it well”. But still, Francis observed, Jonah is “angry” and indignant because the Lord shows forgiveness towards the people who, with open hearts, showed repentance.

Rigidity is an obstacle

“Those who have stubborn souls do not understand what God's mercy is” he said.

They are like Jonah, he continued, they do not know how to open their hearts to the Lord. He described them as “faint-hearted” - with little hearts that are closed to mercy - and attached to issues of naked righteousness: “they forget that the justice of God became flesh in his Son, it became mercy and forgiveness; they forget that God’s heart is always open to forgiveness”.

Something else they forget, the Pope added, is that “the omnipotence of God is manifested primarily in His mercy and forgiveness”.

God's omnipotence is primarily manifested in in His mercy

“It is not easy to understand God's mercy, it is not easy. Much prayer is needed because it is a grace” he said.

And, Francis noted, we are so accustomed to the tit-for-tat attitude - that kind of attitude that implies that justice means paying for what you did, but – he said: “Jesus paid for us and continues to pay.”

Referring again to the story of the Jonah, he said that God could have abandoned the prophet to his stubbornness and to his rigidity. Instead, he went to talk to him and convinced him; he saved him just as he saved the people of Nineveh.

The God of patience who know how to open hearts

Pope Francis pointed out that the message at the heart the prophetic Book is to be found in the dialogue between prophecy, penance, mercy and faint-heartedness or stubbornness. And, he said, it is in the fact that God’s mercy always prevails because His omnipotence is manifested in His mercy.

I advise you, Francis concluded, to read the Book of Jonah today: “it is very small, only three pages, and see how the Lord acts, how His mercy transforms our hearts, and thank the Lord for being so merciful”.