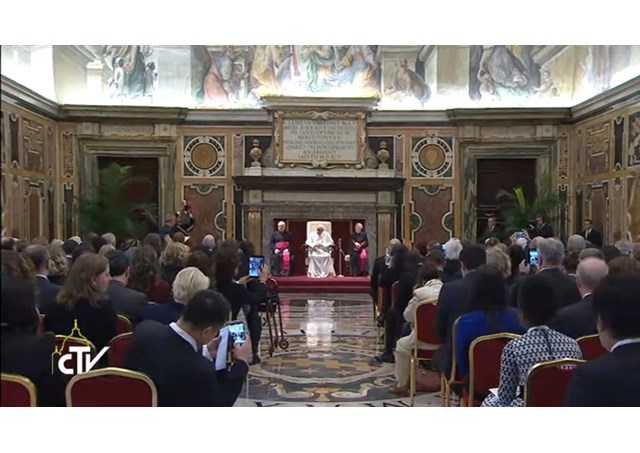 (Vatican Radio) Pope Francis received the participants in the first-ever World Congress on Child Dignity in the Digital World on Friday. The Centre for Child Protection at the Pontifical Gregorian University hosted the four-day event, which brought experts in child care, internet security, law enforcement, education, and a host of other fields together to share experiences and best practices, with a view to addressing the problem of the effective protection of the dignity of minors in the digital world.

Child dignity – a crisis and a response in context

In remarks prepared for the participants and delivered to them in the Clementine Hall of the Apostolic Palace shortly after noon on Friday, Pope Francis placed the challenges facing individuals and whole societies the world, over, in the context of the struggle not only to articulate, but effectively to guarantee, the rights and dignity of every person – especially the weakest and most vulnerable, and chief among these, children and young people – on which the human family has embarked and in which the Church has been engaged especially since the drafting of the 1948 Universal Declaration of Human Rights and the 1959 Declaration on the Rights of the Child.

“As representatives of various scientific disciplines and the fields of digital communications, law and political life,” Pope Francis said, “you [participants in the World Congress] have come together precisely because you realize the gravity of these challenges linked to scientific and technical progress.” He went on to say, “With great foresight, you have concentrated on what is probably the most crucial challenge for the future of the human family: the protection of young people’s dignity, their healthy development, their joy and their hope.”

He went on to say, “[W]e must not let ourselves be overcome by fear, which is always a poor counsellor, nor let ourselves be paralyzed by the sense of powerlessness that overwhelms us before the difficulty of the task,” at hand.

“Rather,” he said, “we are called to join forces, realizing that we need one another in order to seek and find the right means and approaches needed for effective responses.”

Pope Francis also spoke of the painful lessons the Church has learned through her recent experience with clerical sex abuse, saying that the Church has come to acknowledge her own failures in providing for the protection of children. “[E]xtremely grave facts have come to light,” he said, “for which we have to accept our responsibility before God, before the victims and before public opinion.” The Pope went on to say, “For this very reason, as a result of these painful experiences and the skills gained in the process of conversion and purification, the Church today feels especially bound to work strenuously and with foresight for the protection of minors and their dignity, not only within her own ranks, but in society as a whole and throughout the world.”

The pernicious effects of mainstreaming pornography

The Holy Father also discussed the pernicious effects that the so-called “mainstreaming” of pornography – not only its broad and ready availability, but also the acceptance of it by society – on adults. “We rightly insist on the gravity of these problems for minors,” he said, “but we can also underestimate or overlook the extent that they are also problems for adults.”

The Pope noted that the spread of ever more extreme pornography and other improper uses of the internet not only causes disorders, dependencies and grave harm among adults, but also has a real impact on the way we view love and relations between the sexes. “We would be seriously deluding ourselves,” he said, “were we to think that a society where an abnormal consumption of internet sex is rampant among adults could be capable of effectively protecting minors.”

Warning against a “technocratic” approach to the problem

“The second mistaken approach would be to think that automatic technical solutions, filters devised by ever more refined algorithms in order to identify and block the spread of abusive and harmful images, are sufficient to deal with these problems,” he said. “But there is also an urgent need, as part of the process of technological growth itself, for all those involved to acknowledge and address the ethical concerns that this growth raises, in all its breadth and its various consequences.”

What the internet is, and is not

A third risk of which we must be aware in our approach to the digital world is the deluded notion that “the net” is or should be a realm of unlimited freedom.

While the internet and other technologies that are part of the contours, content, and structures of this new digital world have opened vast new fora for free expression and free exchange of ideas and information, it has also offered new means for engaging in heinous illicit activities, including the abuse of minors and offences against their dignity, the corruption of their minds and violence against their bodies.

“This,” said Pope Francis, “has nothing to do with the exercise of freedom: it has to do with crimes that need to be fought with intelligence and determination, through a broader cooperation among governments and law enforcement agencies on the global level, even as the net itself is now global.”

Toward this end, the participants produced a final document, The Declaration of Rome, which includes its own urgent call to action.

Pope Francis received the Declaration from a young girl participating in the Congress, who gave it to him “on behalf of millions of young people around the world who need information and far more protection from the risks of sexual and other forms of abuse on the internet."