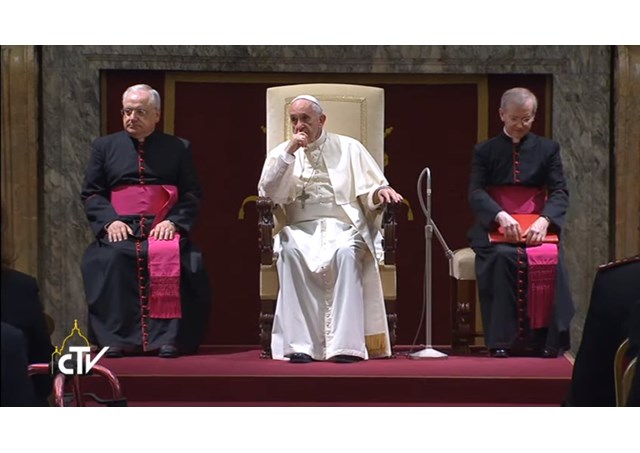 (Vatican Radio) ‘The Declaration of Rome’, the final document produced by participants at the World Congress hosted by the Pontifical Gregorian University on ‘Child Dignity in the Digital World’, issues an urgent call to action.

140 participants from all continents gathered in Rome from 3 to 6 October for the first world congress focused on addressing the dangers children and adolescents face on the internet.

Put  together by a UK-based global alliance called ‘WePROTECT’ and by ‘Telefono Azzurro’, the first Italian helpline for children at risk, the congress drew delegates from countries across the world, including China, Russia, Saudi Arabia, South Africa and the United Arab Emirates.

Receiving participants at the event on Friday morning in the Vatican, Pope Francis was handed ‘The Declaration of Rome’ by a young girl “on behalf of millions of young people around the world who need information and far more protection from the risks of sexual and other forms of abuse on the internet”.

“Using your own words, she said to the Pope, we believe that ‘A society can be judged by the way it treats its children’.”

While technology, she continued, has changed our lives in so many positive ways, it is also being used in the growing exploitation of children, millions of whom are being abused and exploited all over the world.

Explaining that increasingly extreme and dehumanizing content is available at children’s fingertips, she said that some of the effects include cyberbullying, harassment and sextortion, while “online pornography is impacting the malleable minds of young children”.

Highlighting the right of all children to be protected, she called for unity and collaboration in seeking in seeking “positive, empowering solutions for all”.

One of the main points of the document is the need for technology companies and governments to innovate to better protect children.

“This is a problem, she said, that cannot be solved by one nation or one company or one faith acting alone, it is a global problem that requires global solutions. It requires that we build awareness and that we mobilize action from every government, every faith, every company and every institution”.

“In this era of the internet the world faces unprecedented challenges if it is to preserve the rights and dignity of children and protect them from abuse and exploitation.  These challenges require new thinking and approaches, heightened global awareness and inspired leadership.  For this reason this Declaration of Rome appeals to everyone to stand up for the protection of the dignity of children” she concluded.

One of the participants at the Congress was Antoine Normand from Canada. Normand is the founder of BlueBear, a company that combats child pornography on the Internet thanks to the development of software which analyzes and categorizes image and video evidence files seized during child pornography investigations and that is used in collaboration with the Police.

Normand was at the audience with the Pope and sums up the content of “The Rome Declaration.”

Please find below the full text of “The Rome Declaration”:

The Declaration of Rome

Pope Francis -- “A society can be judged by the way it treats its children.”

Every child’s life is unique, meaningful and precious and every child has a right to dignity and safety.  Yet today, global society is failing its children.  Millions of children are being abused and exploited in tragic and unspeakable ways, and on an unprecedented scale all over the world.

Technology’s exponential advancement and integration into our everyday lives is not only changing what we do and how we do it, but who we are.  Much of the impact of these changes has been very positive.  However, we face the dark side of this new-found world, a world which is enabling a host of social ills that are harming the most vulnerable members of society.

While undoubtedly the Internet creates numerous benefits and opportunities in terms of social inclusion and educational attainment, today, content that is increasingly extreme and dehumanizing is available literally at children’s fingertips.  The proliferation of social media means insidious acts, such as cyberbullying, harassment and sextortion, are becoming commonplace.  Specifically, the range and scope of child sexual abuse and exploitation online is shocking.  Vast numbers of sexual abuse images of children and youth are available online and continue to grow unabated.

The detrimental impact of pornography on the malleable minds of young children is another significant online harm.  We embrace the vision of an internet accessible by all people.  However, we believe the constitution of this vision must recognize the unwavering value of protecting all children.

The challenges are enormous, but our response must not be gloom and dismay.  We must work together to seek positive, empowering solutions for all.  We must ensure that all children have safe access to the internet to enhance their education, communications and connections.

Technology companies and government have shown leadership in this fight and must continue to innovate to better protect children.  We must also awaken families, neighbours, communities around the world and children themselves to the reality of the internet’s impact upon children.

We already have potent global platforms in place and important global leaders making significant progress in fulfilling these aims.  The Centre for Child Protection at the Pontifical Gregorian University conducts international safe-guarding work in 30 countries on four continents.  The WePROTECT Global Alliance, launched by the United Kingdom, in partnership with the European Union and the United States, unites 70 nations, 23 technology companies and many international organizations in this fight.   The United Nations is leading a global effort to achieve UN Sustainable Development Goal 16.2 to eradicate violence against children by 2030, particularly through the Global Partnership to End Violence Against Children.

This is a problem that cannot be solved by one nation or one company or one faith acting alone, it is a global problem that requires global solutions. It requires that we build awareness, and that we mobilize action from every government, every faith, every company and every institution.

This Declaration of Rome issues a call to action:

1 – To world leaders to undertake a global awareness campaign to educate and inform the people of the world about the severity and extent of the abuse and exploitation of the world’s children, and to urge them to demand action from national leaders.

2 – To leaders of the world’s great religions to inform and mobilize members of every faith to join in a global movement to protect the world’s children.

3 – To the parliaments of the world to improve their laws to better protect children and hold those accountable who abuse and exploit children.

4 – To leaders of technology companies to commit to the development and implementation of new tools and technologies to attack the proliferation of sex abuse images on the Internet, and to interdict the redistribution of the images of identified child victims.

5 – To world’s ministries of public health and the leaders of non-governmental organizations to expand the rescue of child victims and improve treatment programs for victims of abuse and sexual exploitation.

6 – To government agencies, civil society and law enforcement to work to improve the recognition and identification of child victims, and ensure help for the massive numbers of hidden victims of child abuse and sexual exploitation.

7 – To the world’s law enforcement organizations to expand regional and global cooperation in order to improve information sharing in investigations and increase collaborative efforts in addressing these crimes against children which cross national boundaries.

9 – To governments and private institutions to enhance resources available to psychiatric and other treatment professionals for expanded treatment and rehabilitation services for children who have been abused or exploited.

10 – To the leading authorities in public health to expand research into the health impacts resulting from the exposure of young children and adolescents to graphic, extreme internet pornography.

11 – To leaders of the world’s governments, legislative bodies, private industry and religious institutions to advocate for and implement techniques to deny access by children and youth to internet content suitable only for adults.

12 – To governments, private industry and religious institutions to undertake a global awareness campaign directed at children and youth to educate them and provide them with the tools necessary to use the internet safely and responsibly, and to avoid the harm being done to many of their peers.

13 – To governments, private industry and religious institutions to undertake a global awareness initiative to make citizens in every country more alert and aware regarding the abuse and sexual exploitation of children, and to encourage them to report such abuse or exploitation to appropriate authorities if they see it, know about it or suspect it.

In this era of the internet the world faces unprecedented challenges if it is to preserve the rights and dignity of children and protect them from abuse and exploitation.  These challenges require new thinking and approaches, heightened global awareness and inspired leadership.  For this reason this Declaration of Rome appeals to everyone to stand up for the protection of the dignity of children.

Presented this 6th day of October 2017