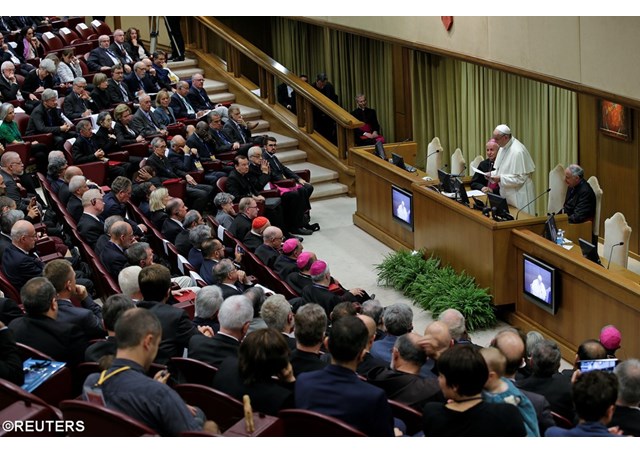 (Vatican Radio) One cannot be silent in the face of an “unscrupulous materialism” that marks the alliance between economy and technology, and that treats life as a resource to be exploited or discarded by power and profit.  “Unfortunately men, women and children the world over are experiencing the bitterness and pain of the “illusory promises” of this “technocratic materialism”, said Pope Francis on Thursday.

He was speaking to the members of the Vatican’s Pontifical Academy for Life (PAV) at the start of their 2-day general assembly in Rome.  The Oct. 5-6 meeting is holding a workshop on the theme “Accompanying Life: New Responsibilities in the Technological Era.”

Technology against person and life

In the face of the effects of recent technological developments in life sciences and the power of biotechnologies that permit extensive manipulation of life, unthinkable until recently, Pope Francis urged for a behavior that is consistent with the dignity of the human person and of life and its meaning and value.  The Pope observed that contrary to the welfare promised by this “technocratic materialism” with the expansion of the market, what we are witnessing is widening territories of poverty, conflict, waste and abandonment, resentment and despair. ‎Instead, he said, authentic scientific and technological progress should inspire more humane policies.

In this regard, the Holy Father said, Christian faith and the Church’s rich tradition of enlightened minds can inspire today’s believers repair the “fracture between generations”  that interrupts the transmission of life.  The life of ‎fathers and mothers in advanced age wants to be honoured for what they have generously given, and not be discarded for what they don’t have any more, he said.

Neutralizing sexual differences is not a right

In this initiative, the Word of God sheds light on the origin of life and it destiny, the Pope said.  The narrative of creation should be read as God’s act of love that entrusts creation and history to the alliance between man and woman.  But neither of them can alone assume this responsibility, because they were created together in their blessed difference.  In this regard, the Pope said, recent effort to assert the dignity of a person by radically neutralizing sexual differences and the understanding of man and woman is not right. He said, the utopia of the “neuter”, ‎removes both the human dignity of the sexually different ‎constitution as well as the personal quality of the ‎”generative transmission of life”.

Generating and caring for life

The generative alliance of man and woman is a defence for the worldwide humanism of men and ‎women, ‎not a handicap, the Pope said warning, “if we reject this, our history will not be renewed.”  The passion for accompanying and caring for life, along the entire arch of its individual and social ‎history, calls for a revival of an ethos of compassion or tenderness for the generation and ‎regeneration of the human being in its distinction.‎  The Pope thus called for reviving sensitivity for the various stages of life, especially for children and the elderly in all their fragility, vulnerability and corruptibility.