Pope Francis at Mass in Santa Marta: rediscover your roots 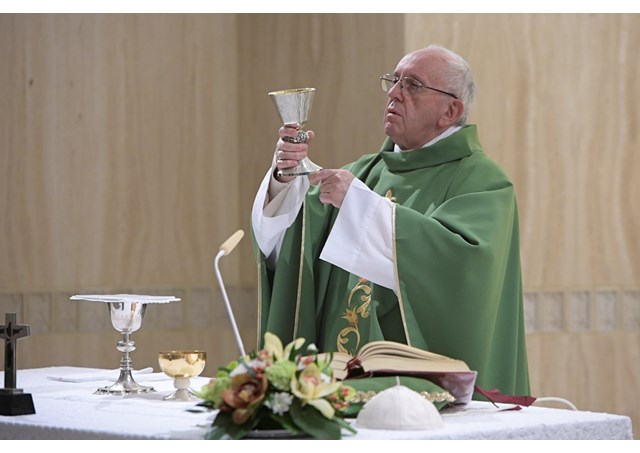 (Vatican Radio) Pope Francis said Mass in the chapel of the Casa Santa Marta on Thursday morning. In remarks to the faithful following the Readings of the Day, the Holy Father reflected on the importance of keeping tethered to our roots – especially our spiritual roots – and avoiding what he called “psychological self-exile”.

Taking as his starting point the reading from the Book of Nehemiah, in which the prophet recounts Ezra’s reading of the law to the whole assembly of the people before their re-entrance into the holy city, Jerusalem, after some seventy years of Babylonian captivity, Pope Francis recalled the nostalgic tears of Nehemiah – who was cup-bearer to the Persian king, Ataxerxes, at Babylon.

Then Pope Francis recalled the verse of Psalm 137, which says, “Upon the rivers of Babylon, there we sat and wept: when we remembered Sion[.]”

The Pope also reflected on the “nostalgia of migrants,” those who are, “far from home and want to return.”

On the shores of Babylon - real and spiritual

After so many years of exile, the roots “had weakened” but were not lost. Recovering the roots “means recovering the [sense of] belonging of a people,” Pope Francis said. “Without roots,” he continued, “we cannot live: a people without roots or at risk of losing roots, is a sick people”:

“A person without roots, who has forgotten his roots, is sick. Finding, rediscovering their roots and taking the strength to go forward, the strength to flourish and, as the poet says, ‘the power to flourish because – he says – what the tree has borne in fruit comes from what he has buried.’ Just that relationship between the root and the good we can do.”

Along this journey of recovery, however, the Pope noted, there has been “so much resistance”:

The people, however, go forward, and achieve the day on which they are finally to rebuild their city. The people rally to “restore the roots,” that is to say, to hear the Word of God, which the scribe Ezra read – and the people were weeping once more, but this time their tears were not those shed on Babylonian shores: “It was the weeping of joy, the encounter with their roots, the encounter with their belonging [to God and to one another].” After reading, Nehemiah invites them to feast. This is the joy of those who have found their roots:

The courage to weep

The Pope went on to invite all those at Mass to read the whole of the eighth chapter of Nehemiah, from which the First Reading of the Day was drawn, and to ask whether they have not themselves “let fail the memory of the Lord,” and if they have, whether they are ready start a journey to recover their roots,  or whether they prefer to be closed in on themselves in the soul’s self-imposed exile. Finally, Pope Francis said that if you are “afraid of crying,” you will have, “fear of laughing,” because, after one weeps with sadness, there come tears of joy. We must therefore ask for the grace of the “repentant cry,” the weeping of those who are “sad for their sins,” but also for the weeping of joy, because the Lord “forgave us and has done in our lives what He did with his people.”