Pope at Mass: 'ask the Lord for the courage to follow Jesus' 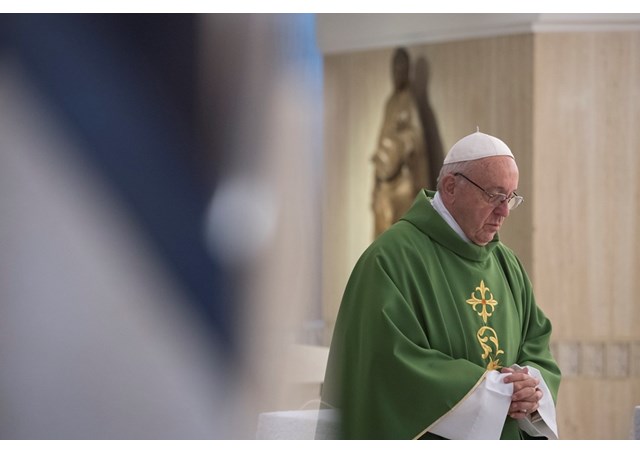 (Vatican Radio) Pope Francis has invited Christians to turn to God to in search of the courage and strength needed to follow Jesus in our lives.

Speaking on Tuesday morning during the homily at Mass in the Casa Santa Marta, the Pope reflected on Jesus’s journey to Jerusalem as the moment of His crucifixion drew near.

Accepting the will of his Father, Jesus – he said – resolutely determined to undertake that journey and announced His intention to the disciples.

Jesus: a model of determination and obedience

“Only once, the Pope recalled, in the Garden of Gethsemane did He ask the Father to ‘remove the cup of wrath He was about to drink’, but each time He submitted to the Father’s will.”

That’s what the Father wants of us, he said, determination and obedience, and He will await with infinite patience.

Francis went on to explain that the disciples did not follow their Master during his journey to Jerusalem.

“At times the disciples did not understand what Jesus was saying or did not want to understand because they were afraid; other times they hid the truth or they were distracted by other things; or – as we can read in today’s Gospel: they searched for an alibi so as not to think about what was awaiting the Lord” he said.

He pointed out that Jesus was alone in his decision because no one understood the mystery of Jesus, and noted that the only one that God sent to strengthen and comfort Him in the Garden of Gethsemane was an angel sent from Heaven.

“Let us take some time, the Pope said, to think about Jesus who loved us so much, who walked alone towards the cross: think about Him and thank Him for his obedience and His courage and enter into conversation with Him.”

Speak to Jesus, Francis concluded, acknowledging all the things He has done for us, acknowledging the patience with which he tolerates our sins and our failures.

“Take some time today – five, ten, fifteen minutes – either before the crucifix or with your imagination, to ‘see’ Jesus walking determinately towards Jerusalem and ask for the grace to have the courage to follow him closely” he said.