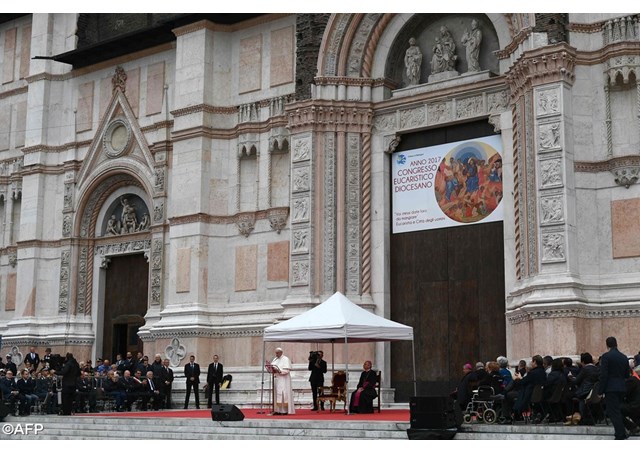 (Vatican Radio) Arriving at Bologna following a morning visit to the town of Cesena, Pope Francis greeted representatives of the world of labour ahead of the Sunday Angelus.

In his address to workers, Pope Francis emphasized that it is only together that we can come through the present economic crisis and “build the future.” Only dialogue, he said, can help us find new and effective answers that can help everyone.

The Holy Father noted that in the region of Bologna, there has been a long experience of cooperation, an experience “that gives birth to the fundamental value of solidarity. Solidarity, he said, must never be bent toward to the logic of financial profit, which would harm the most needy amongst us. “Seeking a more just society,” he continued, “is not a dream of the past but a commitment, a work, that today needs everyone” to cooperate.

In particular, the Pope said we must never grow used to the situation of youth unemployment or job loss. People must never be treated merely as statistics.

Speaking to the challenge of fighting poverty, Pope Francis said we cannot truly help the poor without offering them the possibility of finding work and dignity. He pointed to the recent “Pact for Work,” in which various elements of society, including the Church, made "a common commitment to help one another in the search for permanent answers, not charity (It: elemosine = almsgiving)." This, he said, “is an important method that I hope can bear the hoped-for fruits.”

The economic crisis, the Pope said, “has a European and a global dimension”; and it is also “an ethical, spiritual, and human crisis.” And, in strong terms, he says it is rooted in “a betrayal of the common good, on the part of powerful individuals and groups.” And so, he said, it is necessary “to take away the centrality of the law of power and assign it to the person and the common good.” But in order to do so, he continued, it is necessary to increase opportunities for dignified work.

Pope Francis delivered his address in the piazza in front of the Basilica of Saint Petronius, known as “Father and Protector.” This saint, the Pope said, is always represented holding the city in his hands. “From this we can see physically three constitutive elements of your city,” he said: “the Church, the Community, and the University.” “When these three elements dialogue and collaborate among themselves,” he said, “it strengthens the precious humanism that they express, and the city, so to speak, ‘breathes,’ has a horizon, and is not afraid to confront the challenges that are present.”

He concluded his address by encouraging those present to appreciate this humanism “in order to seek wise and far-seeing solutions to the complex problems of our time, seeing them, yes, as difficulties, but also as opportunities for growth and improvement.”

Following his address, the Holy Father led the faithful in the recitation of the Angelus, and afterwards had lunch with the poor in the Basilica.