Pope in Bologna - meeting with migrants 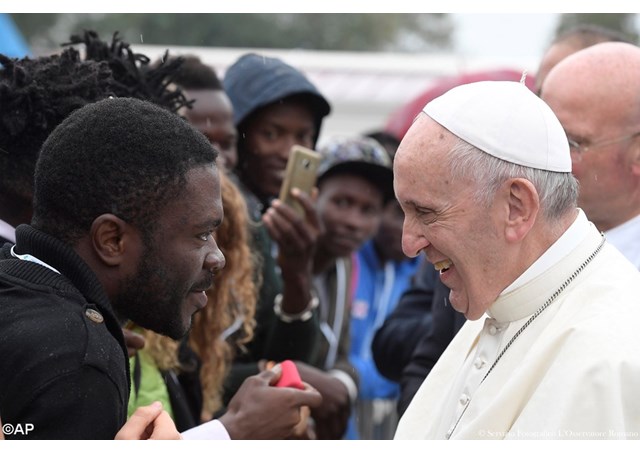 (Vatican Radio)  Pope Francis is on a day-long visit to the northern Italian region of Emilia-Romagna on Sunday, where he is visiting the cities of Cesena and Bologna.  After holding two meetings in Cesena, he flew to Bologna where his first appointment was the with migrants housed at a regional centre at Via Enrico Mattei.

Addressing a round a thousand of them housed there, Pope Francis said that many who don’t know them and are afraid, judge them from far with harshness and coldness.  But, he said one needs to see them from nearby with mercy, for unless we see our neighbour with mercy, we cannot understand his suffering and problems.  “In you, as in every stranger who knocks at our door, I see Jesus Christ, who identifies himself with the stranger of every age and condition, accepted or rejected,” the Holy Father told the migrants.

The Pope said he was among them because he wanted to carry their eyes in his eyes, their heart in his heart.  “I want to carry with me your faces that are asking to be remembered, helped, I’d say "adopted", because in the end you look out for someone who bets on you, gives you confidence and helps you find that future for which you have hoped and arrived here.”  But alas some couldn’t  made it, swallowed by the desert or the sea.  “People don’t remember them,” the Pope said, “but God knows their names and welcomes them to Himself.”   The Holy Father thus invited all present there to a moment of silence to remember and pray for them.

Reminding the migrants that they are “fighters of hope,” the Pope wished that their hope may never turn into delusion, or worse still, despair, thanks to the many who help them.   In turn, he urged the migrants to work hard for a welcoming city, and follow the laws of the land.

Regarding the phenomenon of migrants and refugees, the Pope called for vision and great determination to prevent distortion or exploitation which, he said, becomes even more unacceptable because they are committed on the poor. He urged that increasing number of countries take up private and community support programs for accepting and opening up humanitarian corridors for refugees in more difficult situations to spare them unbearable waiting period and lost time.   Integration, the Pope said, begins with knowing the story of the other. Noting some underage boys and girls among the migrants, the Holy Father said they particularly need tenderness and protection.

Pope Francis concluded his meeting with migrants, commending the generosity of Bologna and its Church, saying, “The city is not afraid to donate the five loaves and the two fish.”  “Providence will intervene and everyone will be satisfied,” he added.

Before and after his talk, the Holy Father took ample time to meet and greet the migrants individually.