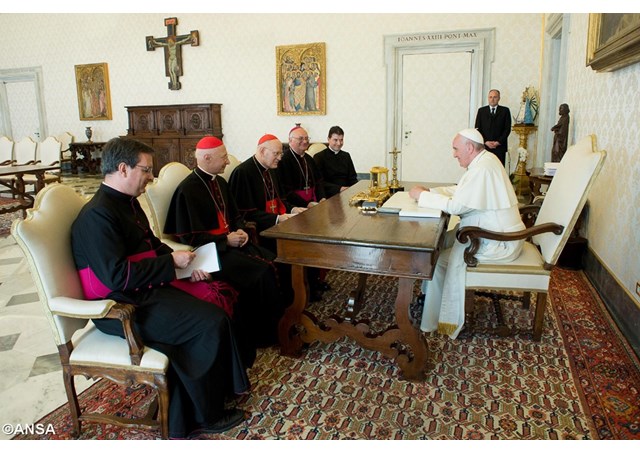 (Vatican Radio) Pope Francis on Thursday sent a message to participants in the plenary assembly of the Council of European Bishops' Conferences (CCEE), encouraging them to continue promoting initiatives of solidarity and fraternity.

This week’s plenary assembly of the CCEE is being held for the first time in Minsk, the capital of Bielorussia. The Church leaders have been discussing the pastoral care of young people, ahead of next autumn’s Synod of Bishops on the faith and vocational discernment of young people.

To His Eminence Cardinal Angelo Bagnasco, President of the Council of European Episcopal Conferences

The Holy Father sends his most cordial greetings to the participants in the plenary assembly of the Council of European Episcopal Conferences and encourages them to continue the important work aimed at identifying paths of pastoral collaboration between the various countries, appreciating the differences and promoting initiatives of solidarity and fraternity. His Holiness hopes that the meeting may contribute to strengthening the bonds of unity and communion between the European bishops, imparting a further and courageous impetus to the church’s mission in Europe especially on behalf of young people to help them to discover, in the light of faith,  their own vocation in the Christian community and in society. With such sentiments, he asks that you continue to pray for him and he willingly imparts the apostolic blessing.

Cardinal Pietro Parolin, Secretary of State for His Holiness