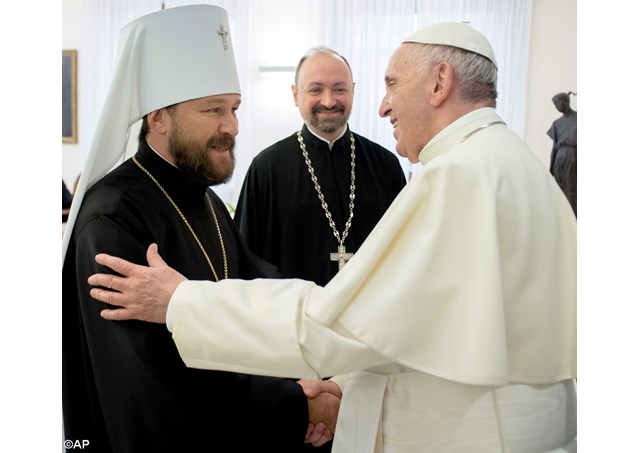 (Vatican Radio) Pope Francis met on Tuesday with Russian Orthodox Metropolitan Hilarion, who came to thank the Holy Father for the recent loan of the relics of the 4th century Saint Nicholas of Myra.

The relics, which were taken from the southern Italian city of Bari to Moscow and St Petersburg, drew huge crowds of Orthodox pilgrims during the two month loan period.

Metropolitan Hilarion, who has been a regular visitor to the Vatican in recent years, heads the department for external church relations.

Speaking to Vatican Radio after the private audience, the Orthodox leader said he and the pope also discussed ongoing tensions in Ukraine, as well as joint efforts to support Christians in the Middle East. Despite a warming of relations between Moscow and Rome, he said there are no current plans for a papal visit to Russia, or for Patriarch Kirill to visit the Vatican.

Metropolitan Hilarion says the “translation of the relics of St Nicholas to Russia was a very special event” as almost 2.5 million people came to venerate them, standing in queues of up to ten hours.

He notes that for many decades, relations between Catholics and Orthodox developed out of sight of ordinary people in Russia. The first event which came to their attentions, he says, was  the historic meeting of Pope Francis and Patriarch Kirill in February last year, but the first event in which people participated was the veneration of the relics.

Asked about other joint projects, the Orthodox leader says his Church has created a working group with Catholics to provide humanitarian assistance to Christians in the Middle East, in particular to catalogue the churches, monasteries and shrines that have been destroyed during the war in Syria. While he says he hopes the war will end soon, he adds there will be an immense task of restoring the country and the churches, as well as providing safe spaces for Christians to go back home.

Speaking about religious freedom in Russia, Metropolitan Hilarion says the concerns of some journalists “in my view, are ungrounded”. He says that Jehovah’s Witnesses have been prohibited from activities recently, since they are considered “not as a Christian Church, but as a sect”.

He says that he discussed with Pope Francis the situation in Ukraine, “where, in our point of view, violations of religious freedom are quite visible and quite open”. He mentions especially laws proposed by the Ukrainian parliament to “discriminate” against the Ukrainian Orthodox Church of the Moscow Patriarchate, which is accused of being an agent of Russia and treated as a foreign religious organisation.

Despite the desire for reconciliation expressed by the pope and the patriarch in their joint declaration, Metropolitan Hilarion says it’s hard to speak of progress in relations between Orthodox and Greek Catholics in Ukraine. He adds that the first step must be for each religious confession “to abstain from aggressive rhetoric”.