Pope Francis: if you want mercy, know that you are sinners 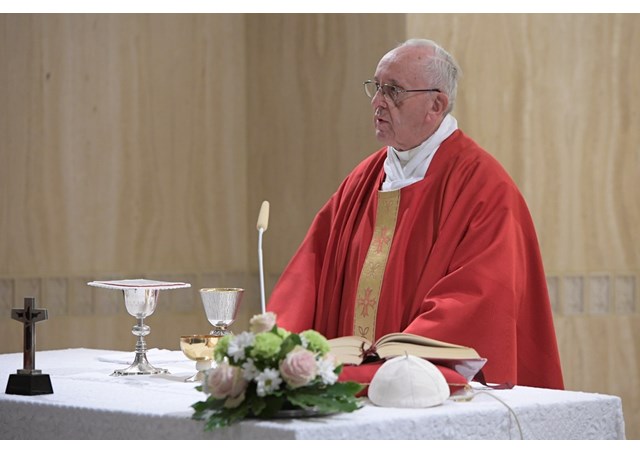 (Vatican Radio) Pope Francis said Mass on Thursday – the Feast of St. Matthew, Apostle and Evangelist – in the chapel of the Casa Santa Marta in the Vatican.

In remarks following the Readings of the Day, which included St. Matthew’s own account of his conversion and calling into discipleship, the Holy Father focused on the three stages of the episode: calling, feasting, and scandal.

Jesus had just healed a paralytic, when He met Matthew – a tax-collector, hence a figure despised by Jewish authorities and considered a traitor to his land and people – sitting at the customs desk.

Jesus looked at him and said, “Follow me,” and Matthew got up and followed Him

Recalling Caravaggio’s famous depiction of the scene, Pope Francis spoke of Matthew’s “sidelong look” with one eye on Our Savior and the other on his purse: a look that was even stand-offish, if not outright aggressive. Then, there was the merciful gaze of Jesus, which communicated such overwhelming love that the resistance of the man who wanted the money, “fails”: Matthew got up and followed Him.

“It is the struggle between mercy and sin,” Pope Francis said

Jesus’ love was able to enter into the heart of that man, Matthew, because he “knew he was a sinner,” he knew “he was not loved by anyone,” and was even despised. It was precisely “that sinful conscience, which opened the door to the mercy of Jesus.” So, “[Matthew] left everything” and went on a new journey with Our Lord.

This is the encounter between the sinner and Jesus:

Matthew – like Zaccheus – feeling happy, invited Jesus to come home to eat. The second stage is indeed “the party” – one of festivity. Matthew invited friends, “those of the same trade,” sinners and publicans.

The Pope said this recalls the words of Jesus in Chapter XV of Luke’s Gospel: “There will be more feasting in Heaven for a sinner who converts than for one hundred just men who will remain just.” This is the feast of the Father's meeting, the feast of mercy. Pope Francis said that Jesus is profligate with mercy, mercy for all.

Then comes the third moment: that of scandal

The Pharisees saw that publicans and sinners were at table with Jesus, and said to His disciples, “How is your Master eating with publicans and sinners?” Thus, Pope Francis noted, “Always a scandal begins with this phrase: ‘But how come?’” He went on to say, “When you hear this sentence, it smells,” and “scandal follows.” They were, in essence, scandalized by “the impurity of not following the law.” They knew “the Doctrine” very well, knew how to go “on the way of the Kingdom of God,” knew “better than anyone how things ought to have been done,” but “had forgotten the first commandment, of love.” Then, "”hey were locked in the cage of sacrifices,” perhaps thinking, “But let's make a sacrifice to God, let us do all we have to do, “so we are saved.” In summary, they believed that salvation came from themselves, they felt safe. “"No,” said Pope  Francis. “God saves us, saves us Jesus Christ”:

“That ‘how come?’, which we’ve heard so many times from Catholics when they saw works of mercy. How come? Jesus is clear, He is very clear: ‘Go and learn.’ He sent them to learn, right? ‘Go and learn what mercy means. [That’s what] I want, and not sacrifices, for I did not come to call the righteous but the sinners.’ If you want to be called by Jesus, recognize yourself a sinner.”

If you would receive mercy, recognize yourselves as sinners

Francis exhorted us, therefore, to recognize ourselves as sinners, not guilty of “sin” in the abstract but guilty of “concrete sins”: so many “we all have committed them,” he said. “Let us look on Jesus with that merciful glance full of love,” he continued.

While still dwelling on the scandal, he noted that there are so many:

“There are so many, many – and always, even in the Church today. They say, ‘No, you cannot, it’s all clear, it’s all, no, no – those are sinners, we have to turn them away.’ Many saints have also been persecuted or suspected. We think of St. Joan of Arc, sent to the stake, because they thought she was a witch, and condemned her. A saint! Think of Saint Teresa, suspected of heresy, think of Bl. [Antonio] Rosmini. ‘Mercy I desire, and not sacrifices.’ And the door to meet Jesus is recognizing ourselves as we are: the truth [about orselves], [that we are] Sinners. And he comes, and we meet. It is very beautiful to meet Jesus.”