Holy See ratifies treaty on the prohibition of nuclear arms 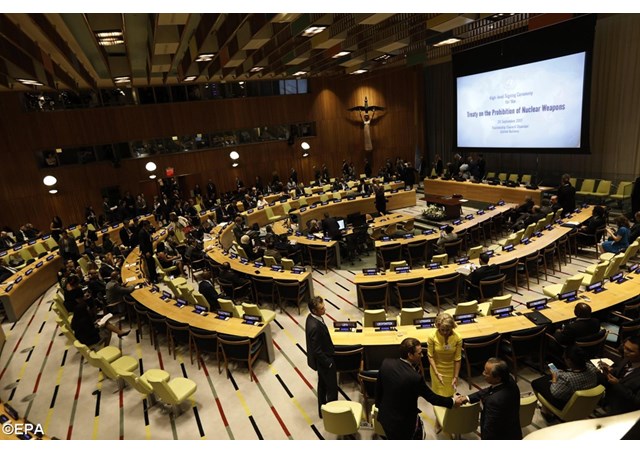 (Vatican Radio) The Holy See on Thursday became one of the first entities to sign and ratify a new treaty prohibiting nuclear weapons. The treaty was signed by Archbishop Paul Richard Gallagher, Secretary for Relations with States, for the Holy See, and in the name of and on behalf of Vatican City State.

More than 40 countries signed the treaty during a high level signing ceremony at the United Nations Headquarters in New York. Along with the Holy See, Thailand also ratified the treaty. More nations are expected to sign in coming days, with the treaty set to go into effect 90 days after it has been ratified by at least 50 nations.

The Treaty on the Prohibition of Nuclear Weapons prohibits a full range of nuclear-weapon-related activities, such as undertaking to develop, test, produce, manufacture, acquire, possess or stockpile nuclear weapons or other nuclear explosive devices, as well as the use or threat of use of these weapons.

More than 120 nations adopted the treaty on 7 July 2017; however, most nations that already possess nuclear arms did not take part in the negotiations.

The following press release was issued following the ceremony.

Yesterday, 20 September 2017, at the United Nations building in New York, H.E. Msgr. Paul Richard Gallagher, secretary for Relations with States, signed for the Holy See and also in the name of and behalf of Vatican City State, the Treaty on the Prohibition of Nuclear Weapons, adopted on 7 July 2017 at the end of the United Nations Conference aimed at negotiating a legally binding instrument for prohibiting nuclear weapons. The signing took place during the High Level Ceremony for the opening of the signing of the Treaty. At the same time H.E. Msgr. Gallagher handed over the relative instrument of ratification.

Pursuant to Article 15, paragraph 1 of the Treaty, it will enter into force for the Holy See and for Vatican City State ninety days after the deposit of the fiftieth instrument of ratification, acceptance, approval or adhesion.