Vatican at UN calls for dialogue in Central African Republic 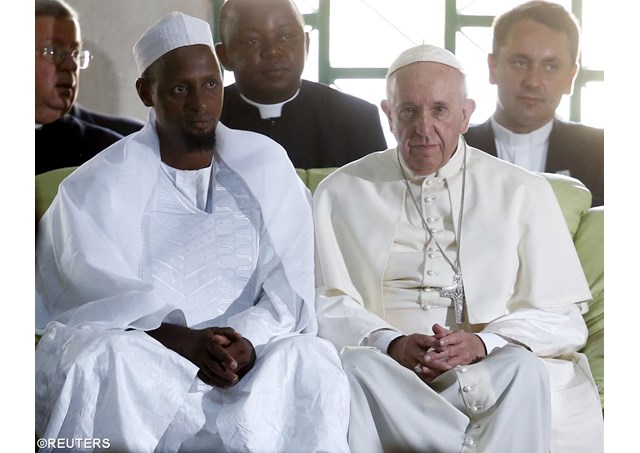 (Vatican Radio) The Holy See’s foreign minister has called for renewed dialogue in the Central African Republic, as well as more effective action to protect civilians of all religious groups.

Archbishop Paul Gallagher’s words came during a meeting at the 72nd session of the United Nations General Assembly in New York on Tuesday. The Vatican Secretary for Relations with States said the Holy See is “greatly concerned” about the intensification of conflict in the CAR, which Pope Francis visited in November 2015.

He praised the role of the UN stabilization mission (MINUSCA) which is working to bring peace to the capital, Bangui, but at the same time he called for greater protection of civilians, without distinction of rank or religious creed, in order to earn the trust of the local population.

Noting that women and children are the most vulnerable victims of the conflict, Archbishop Gallagher appealed to UN peacekeepers to defend their dignity, to guarantee their freedom of movement and to protect them from armed aggression or abuse.

While calling on the CAR government to guarantee the rule of law, to curb and combat corruption, and to ensure access to health care and education for all citizens, Archbishop Gallagher also called on the international community to support democracy and inclusive development in the country.

The financial aid promised during last autumn’s Brussels Conference must be made available, he said, in order to facilitate reconstruction and financial recovery.

Dialogue, disarmament and justice for victims

Calling for a sincere dialogue between all the political forces in the country, Archbishop Gallagher said peace also requires the disarmament and integration of former combatants, justice for the victims of crimes and the safe return of refugees, both Christian and Muslim.

The Holy See is greatly concerned at the intensification of the conflict underway in the Central African Republic, which is causing further deaths and injuries among the civil population and aggravating the situation of refugees and internally displaced persons.

The Holy See appreciates the role of MINUSCA [The UN’s Multidimensional Integrated Stabilization Mission in the Central African Republic], as well as the extension of its mandate by the UN, which is directed to restoring peace to the capital, Bangui, and to neutralizing, in so far as possible, the actions of armed groups, which inflict suffering on defenseless populations. It also wishes, however, to see more effective action in protecting civilians, without distinction of religious creed or rank, in order to avoid partiality and to earn greater trust from the local population. Thus, the increase in the number of peacekeepers and the reorganization of their operations must have as its priority the protection of the security of all citizens and the restoration of peace. Well aware that those who are most vulnerable in the current conflict are women and children, I appeal to MINUSCA to defend their dignity as defenseless people, to guarantee their personal safety and freedom of movement, and to protect them from armed aggression and from any abuse or humiliation that would degrade their human dignity. As Pope Francis remarked during his visit to Bangui, dignity is a “moral value, rightly synonymous with honesty, loyalty, graciousness and honour, which characterizes men and women conscious of their rights and duties, and which leads them to mutual respect” (Address to the Authorities and to the Diplomatic Corps, 29 November 2015).

The International Community is called to give every necessary support for the democratic and inclusive development of those structures that will permit the growth of the country. Of course, it is the national Government’s duty to guarantee the rule of law, to curb and combat corruption, which saps the trust of citizens, and to ensure access to health care and education for citizens of every level, without discrimination. But this in turn requires the coordinated action of the International Community, so that the financial aid promised during the Brussels Conference of last autumn is made available, giving an injection of resources to the country and facilitating its reconstruction as well as its financial recovery.

In any country, a healthy dynamic between the various political forces can be achieved only through sincere dialogue. With the help of the International Community, such a dialogue must become the privileged path to arrive at peace and to give to the Central African Republic the necessary stability for its social, economic and political renewal. Indeed, dialogue is the only solution to any armed conflict and the only way to silence the weapons of war and to give life to words of reconciliation. We might recall here the positive outcome of the pastoral visit of Pope Francis (29-30 November 2015), which gave rise to strong and clear gestures of cooperation, promoted also by the heads of the other religious confessions. Recently, the Holy Father made an appeal to all sectors of the Central African Republic: “may weapons be silenced and may the good will to dialogue prevail so as to give the country peace and development” (Pope Francis, Angelus 21 May 2017).

To reach a fruitful outcome, that process of dialogue must provide for:

-           the right means for disarming the various armed groups, while studying how best to reinsert their members into the civil and democratic community;

-           justice for the victims of heinous attacks on the unarmed population;

-           and the guaranteed return of migrants and refugees, both Christian and Muslim, who should be able to take possession of their property and return to a serene and tranquil life.

In this effort of inclusive dialogue, the Catholic Church’s commitment will not be lacking. Together with other religious confessions, the Church will seek what unites, while rejecting that which causes division or contention, since the search for peace comes before every other good.