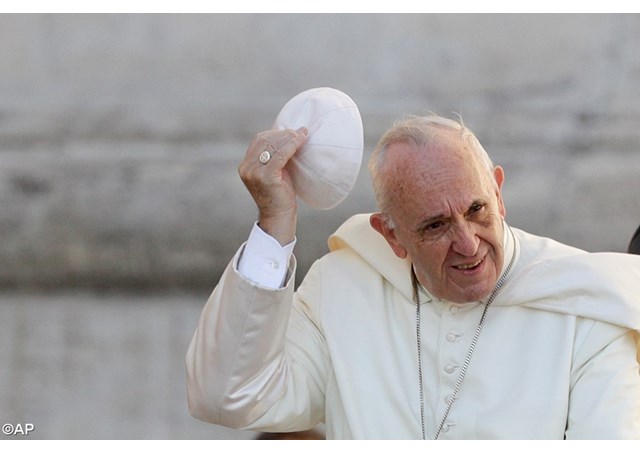 (Vatican Radio) “Wherever the Lord has planted you, stand firm in hope; never lose heart”. Those were Pope Francis’ words at his General Audience on Wednesday as he continued his reflections on Christian hope. This week the Holy Father focused his attention on teaching the virtue of hope, offering his guidance and encouragement especially to young people.

Don't give in to negativity

He told those present in St Peter’s Square, “never to yield to the negativity that tears things and people down, but keep building, try to make this world conform ever more fully to God’s plan.”

“Never despair, he added, build on who you are; if you're on the ground, get up. If you're sitting, get up and go. If boredom paralyzes you, fill your life with good works.”

The Pope continued by saying that, “God does not disappoint: if he has placed hope in our hearts, he does not want to frustrate it with continued frustration. Everything is born to bloom in an eternal spring.”

Pope Francis invited Christians to use their “God-given gifts of mind and heart to help our human family to grow in freedom, justice and dignity.”  “Peace, the Pope said, is in the midst of men, do not listen to the voice of those who spread hate and divisions.”

Jesus, the Holy Father underlined, “gave us a shining light in the darkness: defend it, protect it.

Speaking to the pilgrims present, Pope Francis encouraged them to dream, and concluding his catechesis, he said, “live, love and believe!  And with God’s grace, be beacons of hope to all around you.”