Pope at Angelus: ‘open your hearts to forgiveness' 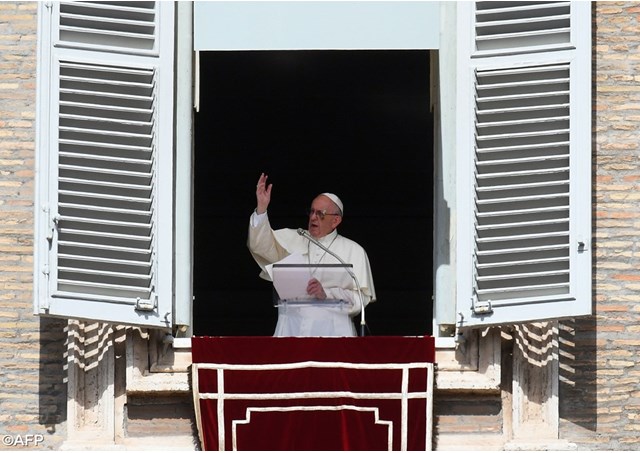 (Vatican Radio) Pope Francis has urged all Christians to open their hearts to forgiveness.

Speaking to the crowds gathered in St. Peter’s Square for the Sunday Angelus, the Pope said that to be able to build peace one must be able to forgive.

“Forgiveness does not deny the injustice one has been subjected to, but it acknowledges the fact that the human being, created in the image of God, is always superior to the wrong that is committed” he said.

The Pope was reflecting on the Gospel reading of the day which narrates the “Parable of the unforgiving servant.”

Commenting on Jesus’ invitation to forgive “not seven times, but seventy-seven times,” Francis said this means that Christians are called always to show forgiveness.

God wants to forgive us

“From the day of our Baptism, he said, God has forgiven us, remitting a terrible debt: the original sin. And then, with infinite mercy, he forgives all of our sins as soon as we show the smallest sign of repentance.”

Anyone – the Pope continued – who has experienced the joy of peace and interior freedom that comes from having been forgiven, can open himself to the possibility of forgiving.

And he pointed out that this teaching is also contained in “The Lord’s Prayer” which says:  ‘forgive us our trespasses as we forgive those who trespass against us.’

God’s infinite love for us

God’s forgiveness, Francis said, is a sign of “His overflowing love for each of us”:  that love that gives us the freedom to stray – like the prodigal son – but that every day awaits our return with open arms; it is the love of the shepherd who goes in search of the lost sheep; it is the tenderness with which each sinner is welcomed when he knocks at His door.

“The Lord is full of love and He wants to offer it to us, but he cannot do so if we close our hearts to loving others” he said.

A special greeting for participants in a ‘Run for Peace’

Following the Angelus prayer Pope Francis had special greetings for participants of a just-ended “Run for Peace” with an itinerary that touched symbolic venues for the different religious confessions present in Rome.

“My hope is that this initiative of culture and sport may favour dialogue, cohabitation and peace” he concluded.