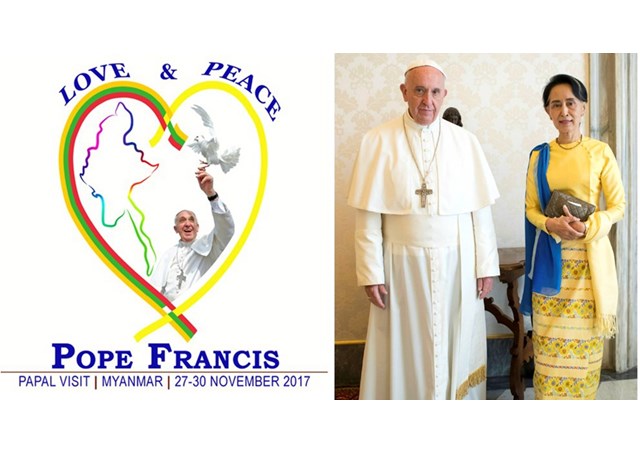 Myanmar’s prominent Catholic Church leader is encouraging the nation’s faithful to prepare themselves spiritually for the visit of Pope Francis to the country this November.

The Vatican announced on Aug. 28 that the Pope will make a 2-nation apostolic visit that will take ‎him to Myanmar, Nov 27 to 30, then to neighbouring Bangladesh, Nov. 30 to Dec. 2. ‎

Cardinal Charles Bo, Archbishop of Yangon, released a statement on Sept. 6, urging the country’s some 700,000 Catholics to prepare themselves spiritually to ensure the success of the papal visit.  "Say special prayers for the pope's visit every day, make the intention while saying the rosary daily, pray at Mass," Cardinal Bo urged.

The Pope will arrive in Myanmar’s business capital Yangon on Nov. 27 where he will hold several meetings. He will then travel to the capital Naypyidaw to meet President Htin Kyaw and State Counselor Aung San Suu Kyi on Nov. 28.  At least 300,000 Catholics and other faiths across Myanmar and neighboring countries are expected to join Pope Francis for an open-air Mass back in Yangon on Nov. 29.

This is the first time that a Pope is visiting Myanmar, formerly Burma.  Pope St. John Paul II, known for his extensive visits abroad, had perhaps desired to visit the tiny Catholic community of Burma, but the country was in the grip of a brutal military rule from 1962 to 2011. When the Pope visited neighbouring Bangladesh on Nov. 19, 1986, he met and addressed a Catholic delegation from Myanmar.

The visit of Pope Francis comes in the wake of the establishment of full diplomatic relations between the Holy See and Myanmar, shortly after a private ‎meeting between Pope Francis and State Counsellor and Foreign Minister of Myanmar, Aung San Suu ‎Kyi in the Vatican on May 4.  ‎On August 12, the pontiff appointed Archbishop Paul Tschang In-Nam ‎as apostolic nuncio to the country.  ‎

Catholics are a minority in the Buddhist majority country of 51 million people. Myanmar's Catholics are served by 16 bishops, more than 700 priests and 2,200 religious.  (Source: UCAN)