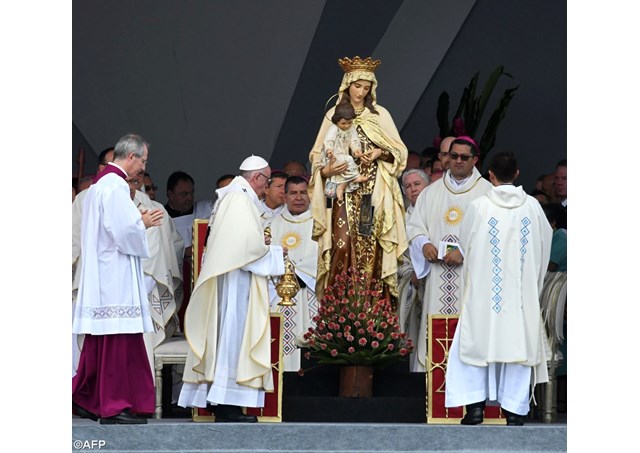 (Vatican Radio) “Mary is the first light who announces night’s end, and above all, the impending day”, Pope Francis said during Mass on Friday to celebrate the Nativity of Mary and the beatification of two martyred Colombian clerics in Villavicencio.

Keeping to the theme of his visit to Colombia, that of ‘Reconciliation and Peace,’ the Holy Father reflected on how Mary transmitted God’s light.

She reflected the rays of that light in her home which she shared with Joseph and Jesus, reflecting it also in her people, her country and that home which is common to all mankind: creation, he said.

Referring to the genealogy of Jesus from the day's Gospel, he made a comparison with that of the people of Colombia whose genealogy also can be traced.  He said Colombia's is a genealogy full of stories, many of love and light; others of disagreement, insults, even of death.

Speaking about the two Colombian martyrs whom he beatified during Mass, the Pope called Monsignor Jesús Emilio Jaramillo Monsalve, Bishop of Arauca, and the priest of Armero, Pedro María Ramírez Ramos, "a sign of an expression of a people who wish to rise up out of the swamp of violence and bitterness".

Please find below the official English translation of the Pope's prepared Homily:

“To be reconciled in God, with Colombians and with Creation”

“Your birth, O Virgin Mother of God, is the new dawn that proclaims joy to the whole world, for from you has been born the sun of justice, Christ our God” (cf. Antiphon for the Benedictus).  The feast of the birth of Mary shines its light over us, just as the gentle light of dawn radiates above the vast Colombian plain, this beautiful landscape whose gateway is Villavicencio, and shines its light too upon the rich diversity of its indigenous peoples.

Mary is the first light who announces night’s end, and above all, the impending day.  Her birth helps us to understand the loving, tender, compassionate plan of love in which God reaches down and calls us to a wonderful covenant with him, that nothing and no one will be able to break.

Mary knew how to transmit God’s light, and she reflected the rays of that light in her home which she shared with Joseph and Jesus, reflecting it also in her people, her country and that home which is common to all mankind: creation.

In the Gospel, we have heard the genealogy of Jesus (Mt 1:1-17), which is not a “simple list of names”, but rather a “living history”, the history of the people that God journeyed with; by making himself one of us, God wanted to announce that the history of the just and of sinners runs through his blood, that our salvation is not a sterile entity found in a laboratory, but rather something concrete, a life that moves forward.  This long list tells us that we are a small part of a vast history, and it helps us not to claim excessive importance for ourselves; it helps us elude the temptation of over-spiritualizing things; it helps us not withdraw from the concrete historical realities in which we live.  It also integrates in our history of salvation those pages which are the darkest and saddest, moments of desolation and abandonment comparable to exile.

The mention of women – though none of those referred to in the genealogy has the category of the great women of the Old Testament – allows us a particular rapprochement: it is they, in the genealogy, who tell us that pagan blood runs through the veins of Jesus, and who recall the stories of scorn and subjugation.  In communities where we are still weighed down with patriarchal and chauvinistic customs, it is good to note that the Gospel begins by highlighting women who were influential and made history.

And within all this we see Jesus, Mary and Joseph.  Mary with her generous yes permitted God to take charge of that history.  Joseph, the just man, did not allow his pride, passions or zeal to expel him from this light.  The narration lets us know, before Joseph is even aware, what has happened to Mary.  His decision, made before the angel helped him to understand what was happening around him, shows his human qualities.  The nobility of Joseph’s heart is such that what he learned from the law he made dependent on charity; and today, in this world where psychological, verbal and physical violence towards women is so evident, Joseph is presented as a figure of the respectful and sensitive man.  Even though he does not understand the wider picture, he makes a decision favouring Mary’s good name, her dignity and her life.  In his hesitation as how best to act, God helped him by enlightening his judgment.

The people of Colombia are God’s people; here too we can write genealogies full of stories, many of love and light; others of disagreement, insults, even of death… How many of you can tell of exile and grief!  How many women, in silence, have persevered alone, and how many good men have tried to put aside spite and resentment, hoping to bring together justice and kindness!   How can we best allow the light in?  What are the true paths of reconciliation?  Like Mary, by saying yes to the whole of history, not just to a part of it.  Like Joseph, by putting aside our passions and pride.  Like Jesus Christ, by taking hold of that history, assuming it, embracing it.  That is who you are, that is who Colombians are, that is where you find your identity.  God can do all this if we say yes to truth, to goodness, to reconciliation, if we fill our history of sin, violence and rejection with the light of the Gospel.

Reconciliation is not an abstract word; if it were, then it would only bring sterility and greater distance.  Reconciliation means opening a door to every person who has experienced the tragic reality of conflict.  When victims overcome the understandable temptation to vengeance, they become the most credible protagonists for the process of building peace.  What is needed is for some to courageously take the first step in that direction, without waiting for others to do so.  We need only one good person to have hope!  And each of us can be that person!  This does not mean ignoring or hiding differences and conflicts.  This is not to legitimize personal and structural injustices.  Recourse to reconciliation cannot merely serve to accommodate unjust situations.  Instead, as Saint John Paul II taught: “[Reconciliation] is rather a meeting between brothers who are disposed to overcome the temptation to egoism and to renounce the attempts of pseudo-justice.  It is the fruit of sentiments that are strong, noble and generous that lead to establishing a coexistence based on respect for each individual and on the values that are proper to each civil society” (Letter to the Bishops of El Salvador, 6 August 1982).  Reconciliation, therefore, becomes substantive and is consolidated by the contribution of all; it enables us to build the future, and makes hope grow.  Every effort at peace without a sincere commitment to reconciliation is destined to fail.

The Gospel text we have heard culminates in Jesus being called Emmanuel, God-with-us.  That is how the Gospel of Mathew both begins and ends: “I will be with you always, to the close of the age” (Mt 28:20).  This promise is fulfilled also in Colombia: Monsignor Jesús Emilio Jaramillo Monsalve, Bishop of Arauca, and the martyred priest of Armero, Pedro María Ramírez Ramos, are a sign of this, an expression of a people who wish to rise up out of the swamp of violence and bitterness.

In these beautiful surroundings, it is up to us to say yes to reconciliation; may our yes also include the natural environment.  It is not by chance that even on nature we have unleashed our desire to possess and to subjugate.  One of your countrymen sings this in a beautiful way: “The trees are weeping, they are witnesses to so many years of violence.  The sea is brown, a mixture of blood and earth” (Juanes, Minas Piedras).  “The violence present in our hearts, wounded by sin, is also reflected in the symptoms of sickness evident in the soil, in the water, in the air and in all forms of life” (Laudato Si’, 2).  We need to say yes with Mary, and sing with her “the wonders of the Lord”, for as he has promised to our fathers, he helps all nations and peoples, he helps Colombia which today wishes to be reconciled; it is a promise made also to its descendants forever.