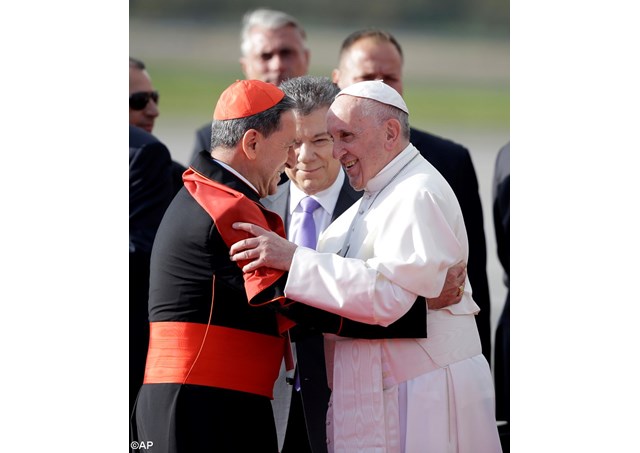 (Vatican Radio) Pope Francis’ eagerly awaited discourse to the leaders of the Latin American Bishops’ Conference (CELAM) provided a rich and colourful canvas of ideas and proposals for an integral response to the many challenges of the continent in this time of change.

Francis has deep-rooted ties to CELAM, an institution founded in the 1950s and that has produced a series of key documents for the Church in the continent including the pivotal “Aparecida” document authored by the then Archbishop of Buenos Aires, Jorge Bergoglio.

That Aparecida document, based on the belief that the Church needs to “rid itself from all expired structures that do not favour the transmission of the faith” is widely seen as a sort of a manifesto for Pope Francis’ pontificate, and surfaces again and again in his vision of the role of the Church today.

His speech to CELAM leaders, on this special Thursday in Bogotá, confirmed Bergoglio’s firm conviction that the only way for them to take forward their continental mission is by empowering young people, women and lay people, expanding their role and trusting them to help the Church rise to the many challenges it faces.

The Pope reaffirmed his trust in CELAM and reminded those present that its mission is to place Jesus’ message of salvation at the very heart of the Church “making it the criterion for measuring the effectiveness of its structures, the results of its labours, the fruitfulness of its ministers, and the joy they awaken.”

And echoing words he has already pronounced in more than one occasion since his arrival in Colombia, “Without joy, he said, we attract no one.”

He spoke of the need for closeness and encounter which, he said, are the means used by God “who in Christ always draws near to meet us” and said that “If we do not set out with him on our mission, we quickly become lost and risk confusing our vain needs with his cause.”

He underlined the fact that “mission with Jesus in Latin America today” means being concrete and warned his brother bishops against being paralyzed in “air-conditioned offices” urging them to “speak to men and women in their concrete situations” in “one-on-one contact”.

Francis also addressed CELAM’s role in encouraging intra-continental unity both in the Church and wider society and praised its work to build bridges, tear down walls, integrate diversity and promote encounter and dialogue.

“No lasting construction in Latin America can do without this essential foundation” he said.

Francis’ long and complex discourse ended with a call to the Church in Latin America to put trust and hope in three elements: its young people, women, and laity.

He urged CELAM to invest time and resources in training young people and in empowering lay Catholics whom he described as protagonists in the Church. And he had strong words for the role of women without whom – he said - the Church will lose its power “to be continually reborn,” and that “if we hope for a new and living chapter of faith in this continent, we will not get it without women.”

And with yet another reference to Aparecida’s core message, he concluded saying that Latin America’s deepest problems will not be resolved by “textbook answers” and “talk show platitudes” but through “that Christian simplicity hidden to the powerful, yet revealed to the lowly.”