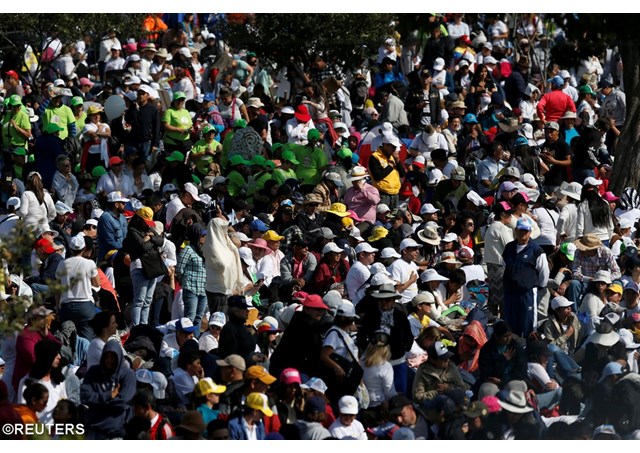 He pointed to the figure of St. Peter in the day’s Gospel who heeded to Christ’s ‎exhortation to put out into the deep and came up with a wonderful catch.

Noting that, like anywhere else, in Colombia too there is darkness such as injustice, ‎social inequality, corruption, selfishness, disrespect for human life, vengeance and hatred, the Holy Father said, “Jesus invites us to put out into the deep, he prompts us to take shared ‎risks, to leave behind our selfishness and to follow him…”

Below, please find the official English translation of the Pope's prepared homily:

The Gospel writer tells us that the calling of the first disciples happened along the shore of Lake Gennesaret, where the people came together to hear a voice capable of guiding them and illuminating them; it was also the place where fishermen used to bring their tiring days to an end, where they looked for sustenance in order to live a dignified and happy life, one not lacking the basic necessities.  It is the only time in the whole Gospel of Luke that Jesus preaches near the Sea of Galilee.  On the open sea their hopes for a bountiful catch are turned into frustration with what seem to be pointless and wasted efforts.  According to an ancient Christian interpretation, the sea also represents the vastness where all peoples live; because of its turmoil and darkness, it evokes everything that threatens human existence and that has the power to destroy it.

We use similar expressions to define crowds: a human tide, a sea of people.  That day, Jesus had the sea behind him, and in front of him a crowd that followed him because they knew how deeply moved he was by human suffering… and they knew of his impartial, profound, and true words.  Everyone came to hear him; the word of Jesus has something special that leaves no one indifferent; his word has the power to convert hearts, to change plans and projects.  It is a word demonstrated by action, not academic findings, cold agreements, removed from people’s pain; for his is a word valid both for the safety of the shore and the fragility of the sea.

This beloved city, Bogotá, and this beautiful country, Colombia, convey many of the human scenarios presented by the Gospel.  Here too the crowds come together, longing for a word of life to englighten all their efforts, and to indicate the direction and beauty of human existence.  These crowds of men and women, the young and the elderly, dwell in a land of unimaginable fertility, which could provide for everyone.  But here, as in other places, there is a thick darkness which threatens and destroys life: the darkness of injustice and social inequality; the corrupting darkness of personal and group interests that consume in a selfish and uncontrolled way what is destined for the good of all; the darkness of disrespect for human life which daily destroys the life of many innocents, whose blood cries out to heaven; the darkness of thirst for vengeance and the hatred which stains the hands of those who would right wrongs on their own authority; the darkness of those who become numb to the pain of so many victims.  Jesus scatters and destroys all this darkness with the command he gives to Peter in the boat: “Put out into the deep sea” (Lk 5:4).

We can get tangled up in endless discussions, adding up failed attempts and making a list of all the efforts that have ended in nothing; just like Peter, we know what it means to work without success.  This nation knows this all too well, given that in a period of six years, from its beginning, there were sixteen presidents, and the country paid dearly for its divisions (the “foolish homeland”); the Church in Colombia knows also about unsuccessful and fruitless pastoral work…, but, like Peter, we too are able to trust the Master, whose word is fruitful even where the hostility of human darkness renders so many attempts and efforts fruitless.  Peter is the man who resolutely accepts Jesus’ invitation, to leave everything and follow him, to become a new fisherman, whose mission is to bring to his brothers the Kingdom of God, where life is made full and happy.

But the command to cast out the nets is not directed only to Simon Peter; he was directed to put out into the deep, like those in your homeland who first recognized what is most compelling, like those who took the initiative for peace, for life.  Casting out the nets involves responsibility.  In Bogotá and in Colombia a vast community journeys forwards, called to conversion in a healthy net that gathers everyone into unity, working for the defense and care of human life, especially when it is most fragile and vulnerable: in a mother’s womb, in infancy, in old age, in conditions of incapacity and in situations of social marginalization.  Great multitudes of people in Bogotá and in Colombia can also become truly vibrant, just and fraternal communities, if they hear and welcome the Word of God.  From these evangelized multitudes will arise many men and women transformed into disciples, who with a truly free heart, follow Jesus; men and women capable of loving life in all its phases, of respecting and promoting it.

We need to call out to one another, to signal each other, like fishermen, to see each other again as brothers and sisters, companions on the way, partners in this common cause which is the homeland.  Bogotá and Colombia are at the same time the shore, the lake, the open sea, the city through which Jesus has passed and passes, to offer his presence and his fruitful word, to call out of  darkness and bring us to light and to life.  He calls everyone, so that no one is left to the mercy of the storms;  to go into the boat of every family, that sanctuary of life; to make space for the common good above any selfish or personal interests; to carry the most fragile and promote their rights.

Peter experiences his smallness, the immensity of the word and the power of Jesus; Peter knows his weakness, his ups and downs…, as we all know our own, as is known in the history of violence and division of your people, a history which has not always found us sharing the boat, the storm, the misfortunes.  But in the same way as Simon, Jesus invites us to put out into the deep, he prompts us to take shared risks, to leave behind our selfishness and to follow him; to give up our fears which do not come from God, which paralyze us and prevent us becoming artisans of peace, promoters of life.