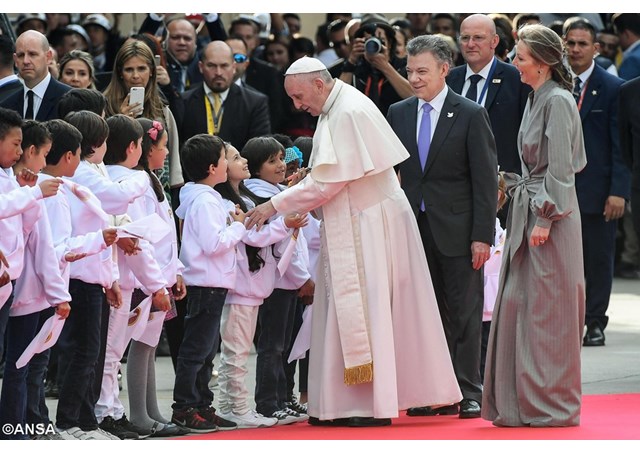 (Vatican Radio) Pope Francis has arrived in Colombia. The papal plane touched down in the military area of Bogotà’s airport just after 4pm local time, where a large delegation of Church and State authorities – including President Santos - welcomed him as he stepped onto the tarmac.

Our correspondent Linda Bordoni is in Bogotà and sent this report:

A crowd of eager Colombian faithful was also there waving flags, cheering and clapping to the rhythm of traditional music and dance while a little boy who was born in captivity – the son of former FARC hostage Clara Rojas – hugged him and handed him a handcrafted ceramic dove, symbol of peace.

It is Pope Francis’s 20th apostolic journey abroad and during his five-day visit he will take his message of reconciliation and hope to all Colombians as he visits the cities of Bogotà, Villavicencio, Medellin and Cartagena from where he will depart on Sunday 10th September.

It’s been 31 years since the Bishop of Rome set foot in this ravaged nation. There were no official discourses scheduled for the occasion and none were needed as Pope Francis immediately set the tone for the visit with a powerful gesture of attention and care for those closest to his heart.

Making his way down the red carpet to the pope-mobile, he stopped at length to touch and caress disabled and sick children, and – especially poignant and significant in the Colombian context -  he took time to engage with and bless, one at a time, a group of mutilated and disabled military veterans representing one of the too many groups of victims of a conflict the nation is struggling to put behind.

Then, the streets were packed with people – ordinary Colombians – for the whole fifteen kilometre drive to the nunciature where a tired Pope Francis can rest and gather strength for a gruelling pastoral visit charged with expectations as he “Takes the First Step” with all the people of the divided and suffering nation as they seek the best route to navigate the treacherous path to peace.

But before tucking up for the night Francis again gave voice to the voiceless and spelt out his priorities by sharing his joy and his faith with a group of poor orphaned children and vulnerable adolescents. “Never lose joy, never lose hope” he told them – and – “don’t forget to pray for me!”