Pope meets with members of the Shalom community 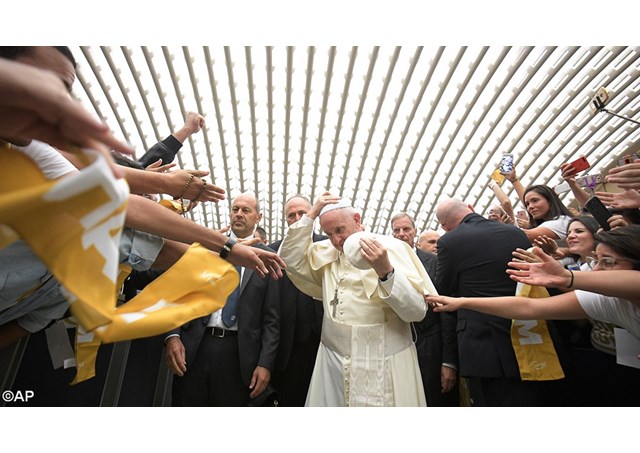 (Vatican Radio) Pope Francis met in the Vatican on Monday with a cheering crowd of young people and families belonging to the Shalom community. Speaking off the cuff in his native Spanish, the Pope replied to questions from three young members of the community about how to witness to their faith in a world often marked by indifference and hopelessness.

The Shalom Catholic community was founded back in the early 1980s in the city of Fortaleza in north-eastern Brazil. Today it counts some 3.800 members spread across the different continents, and is focused on contemplation, unity and evangelization.

In his reply to a young man named Juan from Chile, Pope Francis highlighted the importance of “going out of oneself” to share the good news of God’s mercy with others. God is always with us, he insisted, waiting for us even in the most difficult moments of our lives, just as the father of the prodigal son runs out to embrace his child, despite all the sinful things he has done.

Replying to a young French woman about the role of youth in the life and mission of the Church, the Pope spoke of their joy which is opposed to the sadness that comes from always being self-centred or “self-referential”.

Narcissism, he said, is a disease which causes sadness by making us worry every day about how to appear better than we are. Calling it “the disease of the mirror”, he urged young people to “break the mirror” and look at others, as a way of escaping from today’s consumer culture.

Pope Francis then responded to a young Brazilian man who spent many years as a drug addict before discovering the Shalom community. The Pope said drugs dominate people’s lives by destroying our roots and all that we hold close to our hearts. He urged young people to become aware of those roots and to share freely with others all the blessings that they themselves have received.

Learn from your elders

Finally, the Pope encouraged his listeners to learn from the wisdom of older members of the community, especially their grandparents. Engaging in this inter-generational dialogue, he said, is one of the major challenges facing our societies today.