Pope Francis at Angelus: all have role in building Church 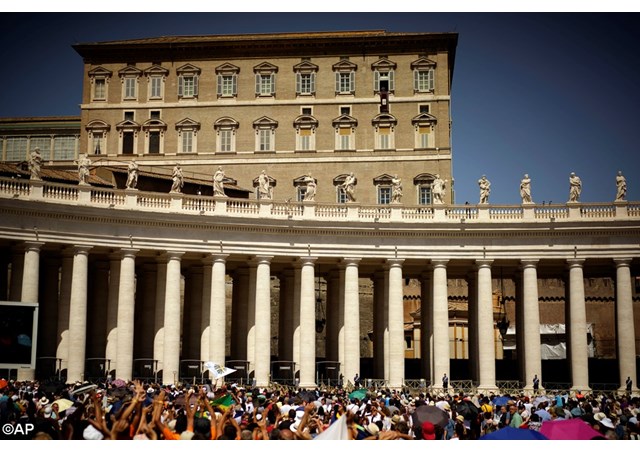 Ahead of the traditional prayer of Marian devotion, the Holy Father reflected on the day’s reading from the Holy Gospel according to St. Matthew, in which the Lord asks the disciples, “Who do you say that I am?” and Peter responds, “You are the Christ, the Son of the Living God.”

Jesus said to Peter in reply, “Blessed are you, Simon son of Jonah, for flesh and blood has not revealed this to you, but my heavenly Father. And so I say to you, you are Peter, and upon this rock I will build my church, and the gates of the netherworld shall not prevail against it. I will give you the keys to the kingdom of heaven. Whatever you bind on earth shall be bound in heaven;
and whatever you loose on earth shall be loosed in heaven.”

Pope Francis said the Lord continues to build His Church in our present day. “Even with us today,” he said, “Christ desires to build His Church, this house solid foundations, which nevertheless does not want for cracks, and which always needs to be reformed, repaired, as in the time of St. Francis of Assisi.”

No “stone” is useless

Pope Francis likened people who have received the Gospel, and those for whom the Gospel in intended, to the little stones that often cause us the most trouble when we feel them underfoot, or that appear ill-suited to use in the edification of grand structures, saying that no one is without some part to play, some role to fill as building material.

“No stone is useless,” he said.

“Rather,” the Pope went on to say, “in the hands of Jesus [the littlest stone] becomes precious, because he picks it up, looks at it with tenderness, works it with his Spirit and puts it in the right place, where He had ever a mind to put it, and where it can be most useful to the whole building.”