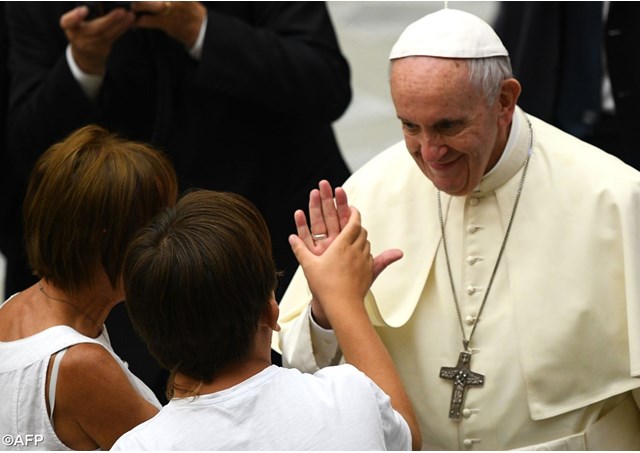 (Vatican Radio) During his General Audience on Wednesday the Pope continued his catechesis on Christian hope reflecting on the hope contained in our ultimate destination, the heavenly Kingdom of God.

Pope Francis explained that on life’s pilgrimage “we encounter the God of surprises who treats us with infinite tenderness, like a father welcoming his children home after a long and difficult journey. “

He went on to say that, even if many experience life as a prolonged period of suffering, such as people haunted by violence and war, there is still “a Father who weeps with infinite compassion for his children, and who waits to console them with a very different future.”

He noted in particular the recent attacks in Barcelona, and sad news coming out of the Democratic Republic of Congo that made headline news.

Among those present in the Paul VI Hall on Wednesday were many English speaking pilgrims. The Holy Father had a special greeting pilgrims from the Cardjin Community International on the fiftieth anniversary of the death of Cardinal Joseph Cardijn.