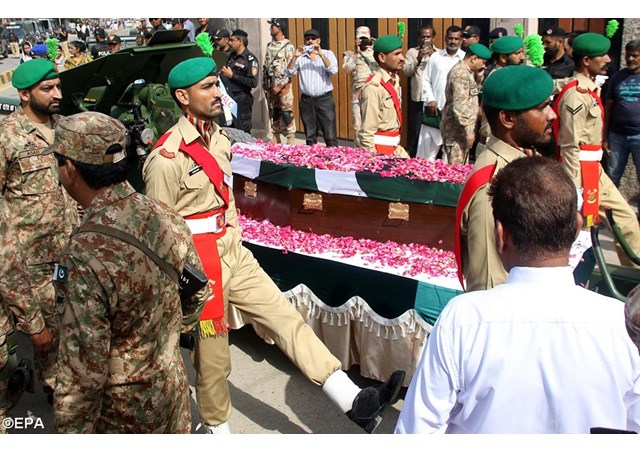 (Vatican Radio)  Pakistan on Saturday laid to rest its famous angel of mercy, German-born Catholic nun Ruth Pfau, credited with eradicating leprosy or Hansen’s disease from Pakistan.  The Daughter of the Heart of Mary Sister was accorded full state honours, including a 19-gun salute, for her priceless service. State-run television broadcast live footage of her flag-draped coffin being solemnly carried by Pakistani soldiers in the southern city of Karachi.

Mourners paid their last respects on Aug. 19 as her body was carried to the Marie Adelaide Leprosy Centre that she founded before being taken on to St. Patrick's Cathedral for her final rites.  The body was then taken to Karachi's Christian cemetery Gora Qabaristan, where she was laid to rest.

The burial ceremony was attended by many state dignitaries including President Mamnoon Hussain, the chief minister and governor of Sindh province as well as several top officials of Pakistan’s armed forces.  Vice Admiral Zafar Mahmood Abbasi, who laid floral wreaths on her grave.

Born on Sept. 9, 1929 in Leipzig, Sr. Ruth Pfau studied medicine in the1950s at the universities of Mainz and Marburg in then West Germany.  After her graduation she joined the religious order of the Daughters of the Heart of Mary, which sent her on mission to India.  On her way she stopped in Karachi on March 8, 1960, because of some visa problems.  It was here that she became involved with working with people affected by leprosy or Hansen’s Disease.

In 1961 she went to Vellore, South India to acquire training in the management of Leprosy. She then returned to Karachi to organize and expand the Leprosy Control Programme.  Her Marie Adelaide Leprosy Centre in Karachi, Pakistan's first hospital dedicated to treating the disease, today has 157 branches across the country.