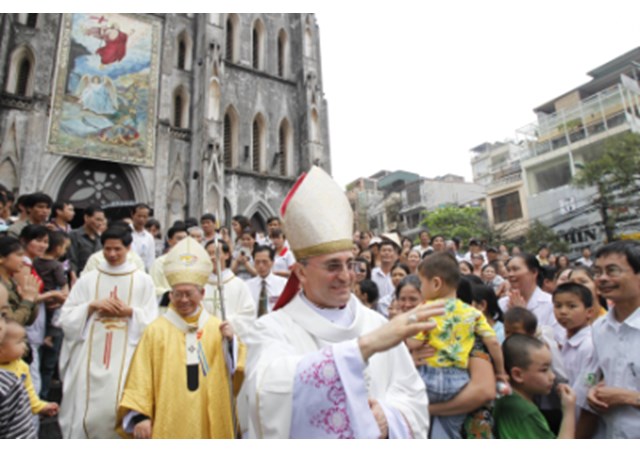 The Pontifical representative to Vietnam has called on the Southeast Asian nation's communist government to respect religious freedom, saying it should regard the Catholic Church as something positive and not ‎a problem to the country.  ‎

Archbishop Leopoldo Girelli, the non-resident representative of the Vatican to Vietnam, made the call during a Mass he presided over on Aug. 13 on the occasion of the 31st anniversary of the Marian Congress, held at the national shrine of Our Lady of La Vang in Quang Tri Province, central Vietnam.

Give back to Caesar what is Caesar's,

Delivering a homily to a large gathering of pilgrims, Archbishop Girelli touched upon the issue of religious freedom in the country.  "In some provinces, civil authorities are anxious and complain about the Catholics and their deeds," said the archbishop.  The 64-year old Italian prelate advised the gathering on the wisdom of St. Peter's words "We must obey God rather than men" and of Jesus, "Give back to Caesar what is Caesar's, and to God what is God's."  "I would like to tell the Vietnamese Caesars to give to God what is God's," he said, to which the congregation responded with a large round of applause.

Joining Arch. Girelli at the altar were Archbishop Joseph Nguyen Chi Linh of Hue, president of the Catholic Bishops' Conference of Vietnam, Cardinal Peter Nguyen Van Nhon of Hanoi, 13 other bishops and some 200 priests.

Church - not a problem

The Vatican envly  said it is the wish of many that religious freedom in Vietnam needs to be properly respected. He said the local Catholic Church must be seen as something positive, rather than as something problematic for the country.  Archbishop Girelli asked the congregation to spend time praying during the congress so that they can acquire God's presence in their life. "Only when we follow Jesus and stay in Him, we are really happy," he said.

The Virgin of La Vang

An estimated 100,000 pilgrims - including people of other faiths from Vietnam and abroad - ‎attended the three-day congress to mark the feast of the Assumption of Mary into Heaven, ‎Aug. 15.‎  During the event, pilgrims attended Masses, went to confession, prayed the rosary and watched cultural ‎performances.‎

The first such congress was organized at the Marian shrine in 1901.‎  The Virgin Mary is believed to have appeared in La Vang in 1798 to console persecuted Vietnamese ‎Catholics.  In 1961, the bishops of Vietnam declared the site as the national Marian Shrine.‎

Relations between the Holy See and Vietnam are improving, despite some tensions in church-state relations at the local level.  Diplomatic relations between the two dissolved in 1975, after the communist north overran South Vietnam.  Since then, visits by more than 20 Vatican delegations eventually led to the visit of Prime Minister Nguyen Tan Dung to Pope Benedict XVI in 2007.  Since then talks to re-establish diplomatic ties led to the formation of a joint working group in 2009.

In 2008, the Holy See was finally able to appoint seven new bishops in Vietnam, and the bishops ordained hundreds of priests.  This led to Archbishop Girelli being appointed a non-resident special envoy to Vietnam in 2011.  The following year, Nguyen Phu Trong, secretary of the Vietnamese communist party, visited Pope Benedict, showing the desire of Vietnam to normalize diplomatic ties.

Archbishop Girelli, who is based in Singapore, pays working visits to dioceses in Vietnam, with each ‎visit lasting only one month. All his activities must be approved by the government.

Vietnam, where 6 million of its 91 million people are Catholic, is one of the world’s five countries that officially claim to be Communist.  The others are China, North Korea, Laos, and Cuba. ‎(Source: UCANEWS)