Modi denounces violence in the name of religion ‎ 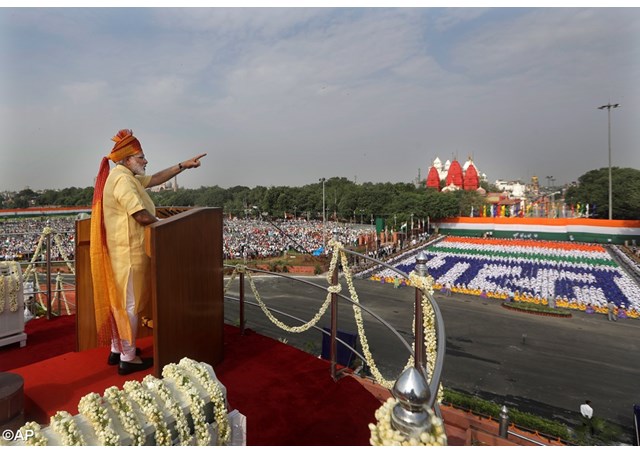 On India’s 71st Independence Day on Tuesday, Prime Minister Narendra Modi urged the nation to reject religious violence, after a series of attacks against minorities sparked debate about whether a surge of Hindu nationalism is undermining the country's secular ideals.

In his August 15 speech from the ramparts of Delhi's Red Fort marking the 70th anniversary of India's independence, Modi also listed his government's achievements, including a fight against corruption.   The speech was light on foreign policy, making no mention of arch-rival Pakistan or of China. India has for nearly two months stationed hundreds of troops along its northern border with China because of a territorial dispute.

No violence in the name of relgion

Modi has spoken out against attacks by right-wing Hindus, many of whom back his Hindu-nationalist Bharatiya Janata Party (BJP), against minority Muslims and lower-caste Hindus accused of killing or trading in cows, considered holy by the majority Hindus.  But the setting of his denunciation of violence on Tuesday was significant.

“Sometimes in the name of faith, some people, due to lack of patience, end up destroying the social fabric. The country is governed by peace, harmony and unity. The poison of casteism and communalism can never benefit the country,” Modi said in Hindi, adding," This is the land of Gandhi and Buddha, we have to move forward taking everyone along."  "This is a part of our country’s culture and tradition. We have to successfully carry it forward, and that is why in the name of faith, violence cannot be allowed."  “The path of violence in the name of faith can never succeed in this country. The country will never accept this.”

Recalling that during the Quit India Movement, the motto of Indians was “Bharat Chhoro” (Quit India), Modi said that the slogan today is “Bharat Jodo” (Unite India”.  “We have to take everyone and every section of the society along to take the country forward,” he said before a teeming crowd at the fort and a huge television audience.  Modi made much of the progress India has made since independence from British rule in 1947.

In his Independence Day speech, the Indian Prime Minister also expressed pain over last week’s death of at least 60 children in a state-run hospital in Gorakhpur, Uttar Pradesh state, amid shortages of supplies - a reminder much remains to be done on India's journey to development.

This was Modi's fourth Independence Day address. Dressed in off-white kurta and a red turban, Modi first paid tributes to the Father of the Nation Mahatma Gandhi at Rajghat Aug. this morning before heading to the Red Fort where he unfurled the Indian flag.

Since his right-wing pro-the Hindu Bharatiya Janata Party (BJP) came to power in a landslide victory  in 2014, Modi has found it difficult to balance the competing demands of groups from his nationalist Hindu power base and those Indians striving to build a modern, secular country befitting its growing economic influence.  Fundamentalist Hindu groups, who consider BJP as their political wing, took the election victory as a ‎mandate to step up their action to make India a Hindu-only nation.‎

Modi also spoke at length about delivering a "new India" by 2022, underlining his confidence of winning the next general election, due by 2019.

Modi was conciliatory towards the Muslim-majority Himalayan region of Kashmir, where violent protests against Indian rule have erupted over the past year, saying neither "name-calling nor bullets" would be enough to pacify the region.  What was needed, he said, were "hugs" for Kashmiris. Kashmir has been divided between Pakistan and India, and since their partition and independence from Britain in 1947 it has been a source of conflict between them.

August 15 is a national holiday in India and is celebrated with festivities at the national , state as well as local levels.  (Source: Reuters/…)