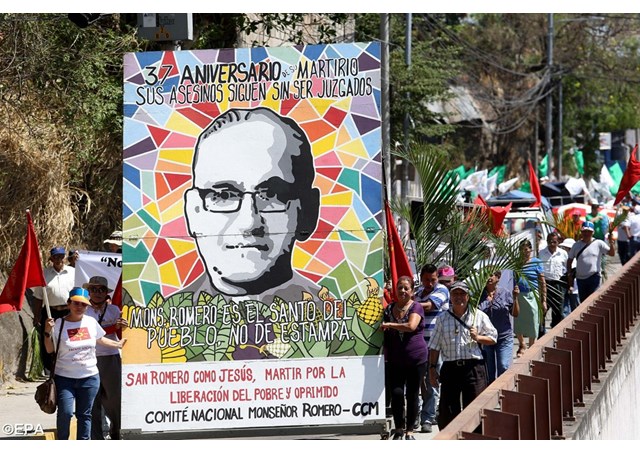 (Vatican Radio) August 15th 2017 marks the centenary of the birth of Blessed Oscar Romero, the archbishop of San Salvador who was assassinated for speaking out on behalf of the poor and oppressed during his country’s military dictatorship.

There are many events planned to mark the anniversary year, both in his native El Salvador but also in countries around the world, where his life and legacy continue to motivate those working for justice and peace today.

In the London diocese of Southwark a Mass will be celebrated at St George's Cathedral on August 12th, while an ecumenical evensong will be held in Westminster Abbey on September 23rd.

The Archbishop of Southwark Peter Smith will preside at the Mass on Saturday, while Italian Archbishop Vincenzo Paglia will travel from Rome to preach the homily. Archbishop Paglia currently serves as head of the Pontifical Academy for Life and the St John Paul II Institute for Studies on Marriage and Family. He is also the postulator of the cause for canonisation of Archbishop Romero.

Philippa Hitchen talked to Archbishop Paglia about why the murdered Salvadoran Church leader continues to inspire so many people of all faiths and none.

Archbishop Paglia says the example of Romero is “a universal example” and “a clear evangelical witness of love” in a world of difficulties, injustices, war and terror attacks. His voice and his testimony, he says, is clear and understandable for all people, above all for the poor and voiceless.

'Providential link' between Pope and Romero

Archbishop Paglia says there is “an interesting alliance between the first Latin American pope and the first martyr of Vatican II” . He describes the “providential link between Romero’s witness and Pope Francis’ engagement” as “a sort of good link between heaven and earth in this current moment”.  In a certain sense, he adds, Pope Francis needs the witness of Romero to continue to preach the Gospel of love for the poor as a strategic pastoral initiative.

After attending the beatification of Romero in San Salvador in May 2015, Archbishop Paglia says he hopes that during the next year the Vatican Congregation for the Causes of Saints may approve a miracle and make its final decision for his canonisation.

After the difficulties of those who opposed Romero’s beatification, Archbishop Paglia says “even those who were against him have to accept the decision of the pope”.  The magisterium of Pope Francis is now linked to the witness of Romero, he says, as “a clear sign of the Holy Spirit’s inspiration in the Church”.

Building a globalisation of solidarity

Archbishop Paglia notes how many people are struck by the example of Romero, not just in the Catholic and Anglican Churches, but followers of other religions “and also a lot of non-believers”

Romero continues “to show, to push all of us”, Archbishop Paglia says, “to trust in the Gospel, to accept the Word of God and put into practice the word of the Gospel”.  If we follow this example, he concludes, “we can not only testify to the Gospel” but we can change the world by helping to “construct a better globalization” of solidarity.