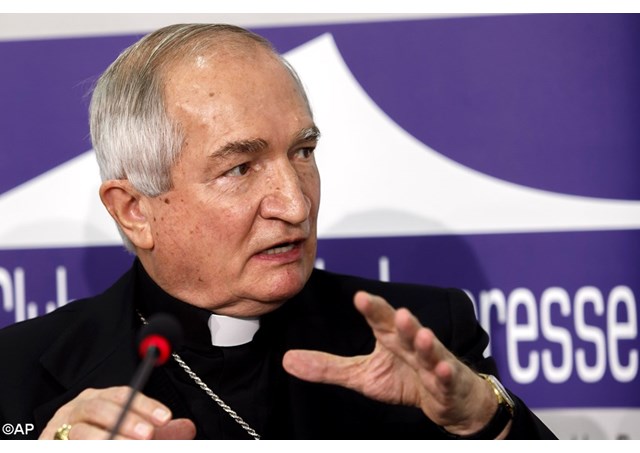 (Vatican Radio) Vatican Radio) The Vatican’s former diplomatic representative to the United Nations has called for dialogue and inclusive negotiations to resolve the current crisis between the United States and North Korea.

Archbishop Silvano Tomasi, the former permanent observer to the UN in Geneva, currently serves as advisor to the Vatican’s new office for Integral Human Development.

His words came as U.S. President Donald Trump ramped up his rhetoric about America’s nuclear arsenal, in response to North Korea’s threats of a missile strikes against U.S. territory.

Archbishop Tomasi told Philippa Hitchen such crises can only be avoided by investing in conflict prevention, rather than in military technology…

Archbishop Tomasi says the current crisis shows how international relations can easily break down when there is a determination “to violate the minimum standard of common sense in dealing with other people”.

Pope Francis, he says, regularly insists that “the way forward is that of dialogue”  and including everyone in negotiations, in search for the common good.

The “way of conflict is always the wrong way”, Archbishop Tomasi continues, which is why “we need to invest time, energy, money, resources” to avoid “arriving at these boiling points of crisis”.

Not walls, but inclusive approach

It is vital to help societies improve the quality of life of their people, he says, “instead of building walls and creating diffidence”. But to do this, he adds, “we need to change the public culture”, insisting that “the way forward is not that of having the latest military technology, but of having an approach of inclusion” and participation in building the common good of the global human family.

Archbishop Tomasi notes that ‘active non-violence’ was the theme of this year’s message for the World Day of Peace, in which Pope Francis indicated several ways that we can all work for conflict prevention.

No to threats of force

The former Vatican diplomat notes that the Holy See’s position on the use and possession of atomic weapons has been well defined and is supportive of a new U.N. convention banning such weapons. While some may consider it “an idealistic measure”, he says, nevertheless “123 countries voted in favour”, showing a desire and an expectation that crises are not tackled through the threat of force, but through more peaceful means that are tied to development.

In this context, he concludes, the discussion of non-violence is clearly “not a resignation from doing things, or moving away from reality, but exactly the opposite, an active engagement to promote everything that is good and that avoids confrontation”.