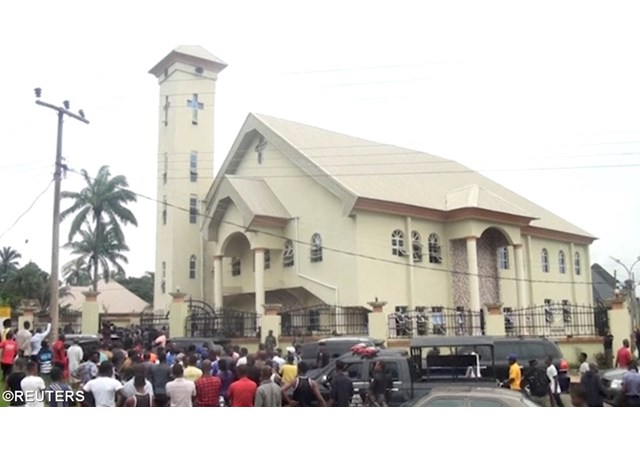 (Vatican Radio) At least 11 people have been killed during an attack at a Church in southeastern Nigeria. 18 other people were wounded when gunmen opened fire on worshippers who had gathered early on Sunday at St Philip’s Catholic church in Ozubulu near the city of Onitsha.

Police said they believe the attack may have been linked to drug trafficking and was carried out following a feud between local residents and member of the community living outside Nigeria.

While the north of the country is wracked by an Islamist insurgency, attacks on places of worship are rare in the southeast of the country where the majority of the population is Christian.

Archbishop Ignatius Kaigama of Jos, in central Nigeria, is currently in Rome. He told Vatican Radio he was shocked and saddened to hear about this attack…

Archbishop Kaigama describes the attack as “terribly inhuman” and “barbaric”, targeted at people who’d assembled at 6am to worship God.

He says the bishops of Nigeria condemn the killings and offer their thoughts and condolences “to the good people of Nnewi diocese”, led by their bishop Hilary Okeke.

Despite these attacks, he says Catholics in Nigeria continue to be strong “committed Christians”, who are ready to show their commitment to Jesus through a life of witness.