Relics of St Nicholas return to Bari after Russian tour 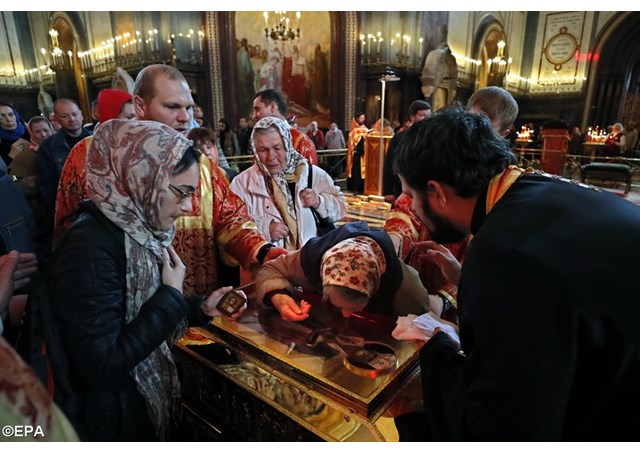 (Vatican Radio) The relics of the 4th century saint Nicholas of Myra return to Italy on Friday after spending over two months in Moscow and St Petersburg.

The relics, which have been preserved in the Italian city of Bari since 1087, were taken to Russia on May 21st and have been venerated by an estimated two million Orthodox pilgrims since then.

Philippa Hitchen takes a closer look at the ecumenical significance of this event.

Saint Nicholas, from Myra in modern day Turkey, is a popular figure in Catholic, Orthodox and Protestant traditions. He’s the patron saint of several countries and cities besides Bari, but is best known as the benefactor who gave gold coins to be used as dowries for the daughters of a poor man who feared they would be sold into slavery if they couldn't marry. The coins, which were found inside the girls’ stockings, gave rise to the legend of Santa Claus or Father Christmas.

But a wealth of other stories surround the life and death of the saint who is known for his wisdom, generosity and care for the poor and vulnerable. He’s especially revered within the Russian Orthodox tradition, which is why over two million Russian pilgrims have queued for hours in Moscow’s Cathedral of Christ the Saviour and the Aleksandr Nevskij monastery in St Petersburg in order to pray for a moment in front of the relics.

On July 28th the head of the Vatican’s Council for Christian Unity, Cardinal Kurt Koch, and the Archbishop of Bari Francesco Cacucci were in Russia to pray together with Orthodox leaders, before escorting the relics back to their southern Italian home. They were also due to meet with Patriarch Kirill and Metropolitan Hilarion, head of external Church relations for the Russian Orthodox Church.

Archbishop Cacucci noted that “the warm reception of Russian religious authorities and of the population at large” exceeded all expectations and mark an important step forward in relations between the Catholic and Orthodox Churches.

Ecumenism of the people

While Pope Francis’ historic encounter with Patriarch Kirill in Cuba last year marked an important milestone at leadership level, he said, this relationship can only flourish if it “increasingly grows into an ecumenism of the people”.

While not all Orthodox leaders support such an ecumenical vision, the archbishop believes the experience of the relics, on loan to Russia for the past two months, may mark the most significant development in the Catholic-Orthodox dialogue since the Second Vatican Council.