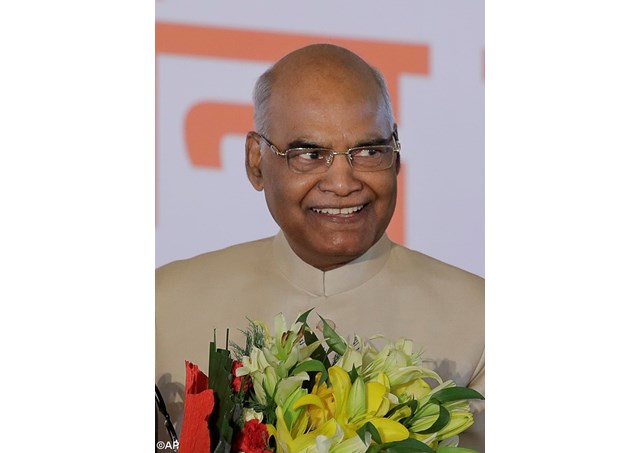 India’s Catholic bishops have welcomed India's new president, hoping he will be able to foster peace, development and justice for all in his largely ceremonial role.  Ram Nath Kovind, a candidate of the right-wing Hindu nationalist Bharatiya Janata Party (BJP) led coalition of prime minister Narendra Modi was declared India’s 14th president on July 20.  The Indian Parliament and state ‎legislatures voted on July 17, the results of which were declared on Thursday.  The 71-year old low-caste Dalit won with an overwhelming majority over Meira Kumar, also a Dalit candidate, backed ‎by the opposition Congress party.‎

The Catholic Bishops' Conference of India (CBCI) offers its "prayers for his good health, wisdom and strength" so he might lead the country "toward peace, development and justice for all peoples," said CBCI Secretary General Bishop Theodore Mascarenhas in a statement.  The bishops pray that "God may assist" Kovind to lead the country as "per the oath of office," and that he will "devote himself to the service and well-being of the people of the Republic of India," the statement said.  The bishops' call to Kovind to uphold the constitution conveys the general air of apprehension from religious minorities that the appointment will present little resistance to the pro-Hindu BJP and their parliamentary majority.

Kovind is a former governor of the eastern state of Bihar and a longtime ‎associate of the Rashtriya Swayamsevak Sangh, or National Volunteer Corps, an Indian right-wing ‎Hindu nationalist paramilitary volunteer organization that has been accused of stoking religious hatred ‎against minorities.  The group is the ideological parent of Prime Minister Narendra Modi's Hindu ‎nationalist Bharatiya Janata Party, which controls enough seats in federal and state legislatures to push ‎its favoured presidential candidate.  Modi himself was associated early in his career with the RSS, which has long ‎propagated a vision of India that promotes the primacy of the country's majority Hindus.‎

Samuel Jaykumar of the National Council of Churches in India also echoed the feelings of the Catholic bishops.  The told UCANEWS he hopes “the new president follows the constitution and retains its values."

The presidential election was held amid reports of protests and campaigns against growing intolerance and violence based on religion. Hindu vigilante groups and extremists are accused of attacking religious minorities in the name of protecting the cow, considered holy Hindus, and preventing the consumption of beef.

Constitutionally, India is secular nation that applies equal respect to all religions. However, hard-line Hindu groups, under the political patronage of the BJP, have been working to create a nation of Hindu hegemony. Some leaders have called for amendments in the constitution to alter the secular character of the nation.

Kovind, India’s second Dalit president after K.R. Narayan, had been earlier embroiled in a controversy when, as a BJP leader in 2010, he said "Islam and Christianity are alien to India."  He further suggested people from these religions should not be given social benefits or quotas for government jobs and educational institutions, even if they come from a poor socio-economic backgrounds.

Vijayesh Lal, executive director of the Evangelical Fellowship of India, told UCANEWS he hopes the "new president, just as the previous president, will act above party politics."

The Indian head of state is bound by the advice of the Cabinet led by the prime minister, who is the ‎chief executive.  Kovind is taking over from Pranab Mukherjee whose term expires on July 24.  The new president will be sworn in on ‎ July 25.  (Source UCANEWS)