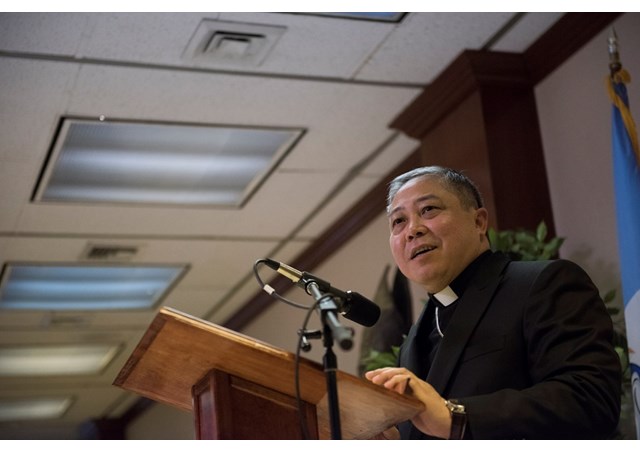 (Vatican Radio)  Archbishop Bernardito Auza, Apostolic Nuncio to the United Nations, on Monday spoke to the UN on the role of religious figures and communities in the elimination of poverty and promotion of peace.

He made the distinction between religious and political leaders, saying “they do not pretend to be who and what they are not.”

Archbishop Auza said religious leaders “are primarily there to call and inspire people to action, and to remind them of the deeper meaning of and reasons for their action, furnishing the ‘reasons for the hope that is in them,’ as Saint Peter would describe it in his First Letter.”

He said indicators of sustainable development towards peace would be “qualitative, not quantitative”.

“More specifically, they will be ethical, evidenced in forming persons and peoples one at a time to become better men and women, boys and girls, those who see themselves as their brothers’ and sisters’ keepers and respond accordingly”.

Please find below the full address:

Intervention of Archbishop Bernardito Auza Apostolic Nuncio, Permanent Observer of the Holy See to the United Nations, on Mobilizing Religious Communities to Act with Solidarity and Shared Responsibility to End Poverty and Promote Peace

I am grateful for the invitation this afternoon to participate in this important conversation on how to mobilize religious communities to act with solidarity and shared responsibility to help those we serve and the whole international community better to grasp the ethical principles for sustainable development and inspire them to collaborate with greater energy and effectiveness in lifting people out of poverty, fostering peace, and implementing the other pillars of the 2030 Agenda.

In my remarks, I would like to share some thoughts mainly on the ethical basis for development, namely the underlying principles why religious communities must mobilize in solidarity to end poverty and promote peace.

I believe that the greatest long-term contribution religious believers and faith-based organizations will collectively and generously offer toward the implementation of the Sustainable Development Agenda will not be the sum of the enormous work they carry out and will continue to do on the ground, in alleviating poverty, feeding the hungry, providing health care, educating multitudes from elementary schools through universities and beyond, promoting the dignity of women and especially their indispensable service as mothers, caring for our water and environment, engaging in peacemaking and peacebuilding, and so many other noble activities.

It will rather be their service as leaven for the implementation of the Sustainable Development Goals (SDGs), today until 2030 and way beyond, in the way they show the deeper anthropological and ethical reasons why our religious communities are indeed mobilizing in solidarity and responsibility in such a concerted way.

The SDGs are not ends in themselves, but means, means to bring about the true good of persons and peoples through care for our common home and all our roommates in that common home. We are living at a time in which many, especially in developed nations and here at the United Nations, like to bracket the most important questions, like those about who we are, where we come from, where we’re going, how we should treat each other, and what is good, true, and genuinely beautiful. While different religious traditions may answer these questions in slightly different ways, these foundational questions — and our answers to them —help the world not to forget about them and how important they are.

Within the specific context of the sustainable development agenda, if we lose sight of these fundamental human coordinates, there’s the serious risk that the SDGs may be understood in only partial ways, through excessively economic, environmental, or sociological lenses, while missing their deeper ethical and anthropological context and purposes. Just like anything good can be misused, if we exclude from our conversations these deeper questions about the why behind-the-what of sustainable development, then the enormous international infrastructure for peace and development could end up actually being used in some circumstances to undermine the very peace and development they were designed to advance. This could happen in particular if the SDGs become wedded, in practice, to inadequate materialistic, individualistic, or hedonistic philosophies that not only leave some behind but intentionally exclude some of our fellow human beings, especially those most vulnerable or inconvenient, from our care and concern.

That’s why it’s essential for religious leaders, communities and believers to help provide, with courage and perseverance, what we could call the “soul” or “conscience” of the sustainable development agenda. In an age of epistemological and ethical relativism, we need to help people retain a notion of the true and good. Similarly, when leaders — whether politicians or those wrapped in a religious mantle — try to instrumentalize religion for purposes incompatible with loving concern for God and neighbor, and scandalously impugn the essential nature of religion and the enormous good believers and faith based organizations do for individuals, communities and the world, we must correct them and correct the record.

This principle is easy to see when religious leaders incite followers toward atrocity crimes, as many of us were able to ponder together last Friday afternoon in the ECOSOC Chamber at the launch of the Plan of Action for Religious Leaders and Actors to Prevent Incitement to Violence that Could Lead to Atrocity Crime. But it’s likewise present when religious leaders mislead those who follow them toward treating those of other races as beneath their care, or similarly those on the move from other countries, those who are physically or mentally handicapped, those whose lives and livelihoods are threatened by pollution, or rising oceans, or increasing desertification, or those who are in the womb or at the end of life whose dignity is treated as lesser quality and undeserving of maximal reverence and protection. Religious believers and communities must, I repeat, remain the soul or conscience of the sustainable development agenda.

Religious leaders are not political leaders or social scientists, and they do not pretend to be who and what they are not. They are not primarily there to measure goals and targets through scientific indicators. They are primarily there to call and inspire people to action, and to remind them of the deeper meaning of and reasons for their action, furnishing the “reasons for the hope that is in them,” as Saint Peter would describe it in his First Letter. Through the prism of their primarily spiritual and moral mission, religious leaders, believers, religions and faith-based organizations care for the flourishing of the entire human person. Striving for authentic human development, they do not compartmentalize development, but work for the integral development of each human person and of the whole human person. Because human progress is an integral part of their vision and mission, besides places of worship they also construct community-building centers, hospitals, schools and universities. In a word, what they do and will keep doing to help achieve the Sustainable Development Goals is the outward expression of their religious beliefs and moral principles. Religious leaders, believes and communities of believers work to protect life and the environment, to empower the weak and the oppressed. They help populations develop their natural resources responsibly and protect them from the exploitation of powerful economic and political interests. They are creative in lifting the poor out of poverty in all its forms and breaking walls of exclusion. Locally rooted, they have first-hand knowledge of the many forms of poverty and inequalities; they have grassroots-level credibility; they can easily find on-the ground personnel who know well their programs. Their grassroots presence favors dialogue among grassroots groups. Universally networked, they are effective advocates of international causes like the eradication of extreme poverty and the care for our common home.

Religions believe and proclaim that peace is essential to development. All studies indicate that countries and regions in conflict have regressed instead of progressing. As Pope Paul VI affirmed in 1967, development is the new name for peace. 1 Building peace requires pursuing development. Without pretentions of economic and political domination, religions and faithbased organizations are generally seen as impartial brokers in this crucial form of peace building.

Pope Francis has been seeking to contribute to this through proposing to the world an ethics based on what he calls an “integral ecology,” something he believes is the necessary foundation for integral and sustainable development (LS 18). We are facing, he wrote in Laudato Si’, not independent crises afflicting the environment on the one hand and the poor, vulnerable and marginalized on the other, but rather “one complex crisis that is both social and environmental” that demands “an integrated approach to combating poverty, restoring dignity to the excluded, and at the same time protecting nature” (LS 139).

In his September 2015 address to the UN General Assembly, Pope Francis underlined that “the misuse and destruction of the environment are also accompanied by a relentless process of exclusion,” and said that this has its roots in “a selfish and boundless thirst for power and material prosperity that leads both to the misuse of available natural resources and to the exclusion of the weak and disadvantaged.” He labeled this selfish consumerism a “culture of waste” and said it flows from a type of spiritual amnesia: we have forgotten that there is a Creator and therefore have lost a sense of wonder and reverence about how we, others human beings, other species and our common home are all related to the Creator. When we fail to see in a clear and healthy way that we are creatures in relation to a Creator and to each other, he says, we are susceptible to the sickness of viewing ourselves as masters entitled to plunder nature and treat others however we see fit (LS 2).

How important it is for religious leaders and believers to help restore the world to what lies behind the sensible, to the recognition that there is a Creator whose existence is knowable also by reason, and that this fact ought to influence the way we treat each and every one of that Creator’s creations. This is, and has to be, the joint work of religious communities in support of not just the fruits but also the roots of sustainable development.

The most important “indicators” assessing genuinely sustainable development are not going to be realized through UN negotiations or through the hard work of the UN’s statistical commission. They will not involve disaggregated data of how many have been lifted out of poverty or how many toxins have been eliminated from our air or water. The most important indicators of progress toward genuinely sustainable development will be qualitative, not quantitative. More specifically, they will be ethical, evidenced in forming persons and peoples one at a time to become better men and women, boys and girls, those who see themselves as their brothers’ and sisters’ keepers and respond accordingly, those who grasp that they are not masters but stewards entrusted with protecting and developing the gift of creation to leave it better for succeeding generations than they have received it.

The more religious leaders are able to partner with each other, the better they will be serving the peoples of the world and collaborating effectively with the international community in the implementation of the Sustainable Development Agenda. This is because religious communities’ most important contribution will be helping everyone to see both the causes of the present crises we’re working together to solve as we seek to eradicate the culture of waste at the heart of the problem and as well as the solution: namely an integral ecology that will lead to integral and sustainable development and to the mobilization in solidarity and responsibility necessary to make that integral ecology a reality.

Thank you very much for your kind attention.