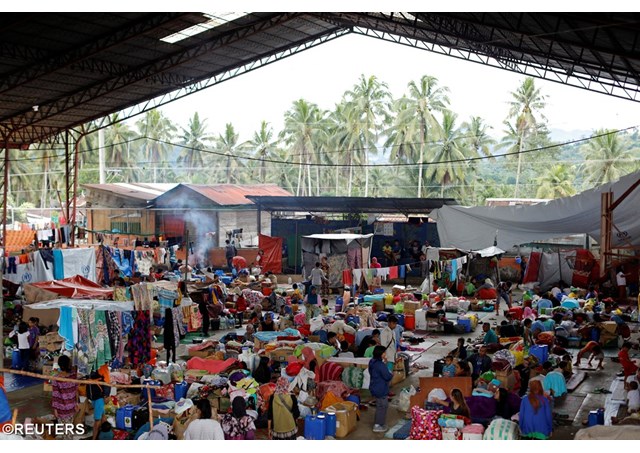 A Catholic archbishop in southern Philippines has condemned alleged attempts by some groups who are taking advantage of the helplessness of those fleeing a conflict in Mindanao region to proselyte them.  Archbishop Emeritus Fernando Capalla of Davao joined Muslim leaders and peace groups in voicing concern over reports that Bibles are being distributed to refugees fleeing Marawi, many of them Muslims.  Copies of the Bible, translated into the Maranao language, were found in relief goods handed to displaced families last week.  Archbishop Capalla warned that the distribution of copies of the Bible along could foment tensions between Christians and Muslims.

Christians as well as Muslims are fleeing the Islamic City of Marawi, where government forces are engaged in a fierce fight with the Maute terrorist group linked with the Islamic State (IS).   After an assault on the Marawi on May 23, the Islamist gunmen burned ‎the ‎Catholic cathedral and a Protestant school, and took a priest and several church workers as hostages.  ‎President Rodrigo Duterte went on the offensive to ‎wrest back Marawi from the terrorists.  More ‎than 350 militants, 87 soldiers and police and 39 civilians have been killed in nearly 7 weeks of ‎fighting.  ‎

Archbishop Capalla expressed his condemnation at the alleged proselyting saying, "If they do it deliberately, it's either an insult or ignorance of the needs of Muslims." The prelate who is co-convenor of the interfaith group Bishops-Ulama Conference said “proselytizing” shows lack of respect and calls into question the sincerity of those who are giving aid to the needy.  "If you want to help, then give only the ... basic needs, like clothing, food, water, among others," said the 82-year-old archbishop who retired in 2012.   "We should be more sensitive," he said, adding that Muslim leaders in the area should be consulted before distributing aid.

There were also reports that some aid organizations are giving out pork-flavored noodles to the evacuees.  The evacuees claimed they did not immediately discover the Bibles in plastic bags that contained relief goods. There were also aid packs that contained Bible stories, also in the local language.  No group has come forward to admit responsibility.

Nearly 400,000 residents have abandoned Marawi and outlying towns in Lanao del Sur province.  ‎More than 18,300 displaced people are currently being sheltered in 78 evacuation centers in Mindanao, 34 of which are located in the provinces of Lanao del Norte, one in Misamis Occidental, and 43 in Lanao del Sur.  (Source: CBCP News)