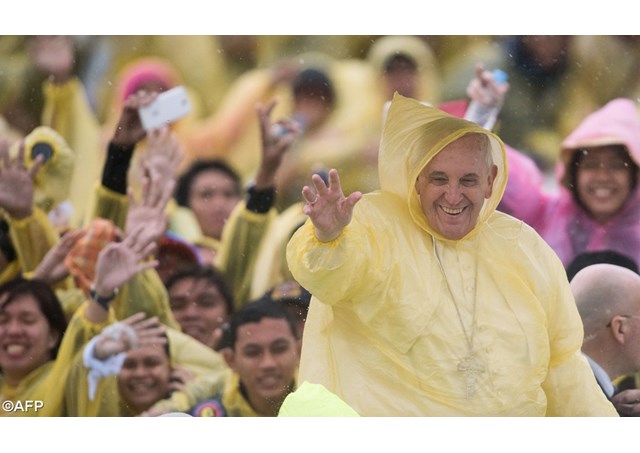 Pope Francis has expressed his “prayerful solidarity” with the Catholic bishops of the Philippines as they began their plenary assembly in the capital Manila on Saturday, CBCP News reported.‎  Members of the Catholics Bishops’ Conference of the Philippines (CBCP) are holding their ‎115th  plenary meeting at the ‎Pope Piux XII Center, 8-10 July, to discuss some of the challenges facing the Church and the nation.

Pope Francis hoped the plenary assembly “may bear spiritual fruit and that you yourselves may grow ‎in deeper faith, hope and charity”.‎    ‎“In this way, together with your priests, you will encourage all young Filipinos to become ‘joyful ‎messengers of challenging proposals [and] guardians of the goodness and beauty which shine forth in a ‎life of fidelity to the Gospel,’” the Holy Father added.

CBCP News said the Pope’s message was relayed by Vatican Secretary of State, Cardinal Pietro Parolin to ‎CBCP President Archbishop Socrates Villegas, who has stepped down at the end of 2 terms as conference leader.  Succeeding him is Archbishop Romulo Valles of Davao, who was elected CBCP president at the start of the assembly,  on 8 July.

‎Among the issues up for discussion during the 3-day meeting are the new priestly formation programme ‎and the challenges faced by the young people in preparation for next year’s Synod of Bishops in Rome.‎   Among the challenges facing the cardinals and bishops are issues such as extrajudicial killings in the war on drugs, the Islamist terrorism in the south, revival of the death penalty, the need for ‎ethical standards in social media and political engagement.

Pope Francis is not new to the Philippines.  During his weeklong  visit to the country in January, 2015, he celebrated Mass under driving rain in Tacloban,  during which he told the faithful his main purpose to visit their land was to show his closness and solidarity with the people of Visayas who were devastated by the typhoon Yolanda in November 2013.  (Source: CBCP News)