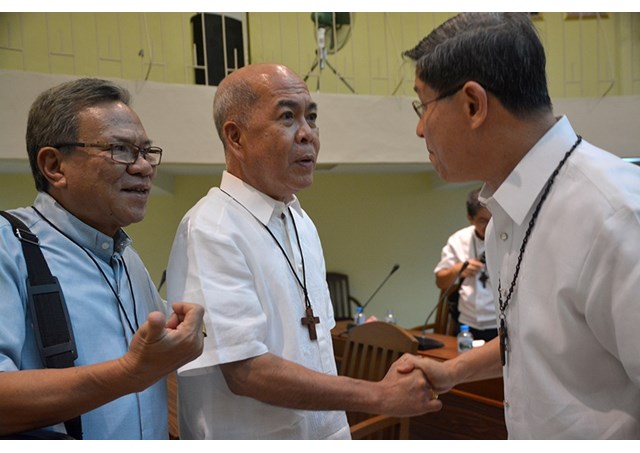 The Catholic bishops of the Philippines on Saturday elected a new president, who will lead their conference for the coming two years.  Archbishop Romulo Valles of Davao was elected the president of the Catholic Bishops’ Conference of the Philippines (CBCP) at the start of the 8-10 July plenary assembly at the Pope Piux XII Catholic Center in Manila.   He takes over from Archbishop Socrates Villegas of Lingayen-Dagupan, who is finishing his second and final term.  Bishop Pablo Virgilio David of Kalookan has been elected CBCP vice president.

Arch. Valles who turns 66 on 10 July has been the CBCP vice-president.   Born in 1951 in Maribojoc, Bohol, he was ordain a priest on 6 Apr., 1976.  Appointed Bishop of Kidapawan on June 24, 1997 by St. Pope John Paul II, he was consecrated bishop on 6 Aug.  Pope Benedict XVI appointed him the Archbishop of Zamboanga on 13 Nov., 2006, and was installed on 9 Jan., 2007.   Five years later, on 11 Feb., 2012, Pope Benedict transferred him to Davao as archbishop, where he was installed on 22 May.  Arch. Valles has served in several CBCP offices and commissions, especially as chairman of the Commission on Liturgy .

Davao, where the Archdiocese of Arch. Valles is based, is the largest city in the Mindanao region that forms the southern third of the Philippines.  More than 70% of the population of Mindanao adhere to Christianity. Catholics form over 60% of the total population with Muslims comprising a little over 20%.   Mindanao Island has seen a communist insurgency, an armed Moro separatist movements and most recently armed Islamist terrorism, based in the city of Marawi.

Terrorist gunmen allied with the so-called Islamic State (IS) attacked Marawi on May 23, burned the ‎Catholic cathedral and a Protestant school, and took a priest and several church workers as hostages.  President Rodrigo Duterte went on the offensive declaring martial law in ‎Mindano region in order to wrest back Marawi from the terrorists who are using the ‎hostages as human shields.

Outgoing president Arch. Villegas who delivered a keynote address to open the plenary session  said the Church must continue to reach out to people with open hands rather than clenched fists.  It is in that space that they will continue to meet the living Christ.  “Closed fists do not love; they hurt. Closed fists do not touch, they strike and injure. Closed fists and prayer do not match; open hands in ‘orante’ [praying] belong to our Christian tradition,” Arch. Villegas said.  He stressed that an open hand that gives is one of the best symbols of Christian faith “because giving is the best proof of loving”.  “We have no tradition of closed fists for our mission is to imitate the crucified hands that remain open to forgive,” he said.

In his opening message, the Arch. Villegas narrated the lessons he learned through the years as head of the Philippine Catholic hierarchy.  Among them, he said, are the attitude of listening and fortitude in the face of adversities and recent challenges the Church is facing.  His address did not mention President Rodrigo Duterte by name, but Villegas recalled how they were attacked as a “bunch of hypocrites” and how they’ve been “calumniated and slandered”.  “We have been cursed and ridiculed but you our shepherds have chosen to fly high when the mockers of the Church chose to go so low,” the archbishop said.  The Church had faced a barrage of attacks and insults from Duterte and his supporters for criticizing his war on drugs that claimed thousands of lives. ‎. When the Church criticized Duterte’s ruthless war on drugs that has killed an estimated 10,000 suspected drug users and peddlers so far, the Philippine president did not minced words and came out fiercely with diatribes and even ‎expletives against the bishops, accusing them of corruption, hypocrisy and womanizing.   ‎ “I know that the values of an open hands, fortitude and listening will be same pastoral tools that we will use to serve and guide the flock of God,” Arch. Villegas added.

The 4-year long CBCP leadership of Arch. Villegas has had its share of challenges even with the previous administration of Benigno Aquino, such as a controversial population control bill and issues of corruption.   During his term the nation faced two devastating natural disasters - the earthquake in Bohol province and the typhoon Yolanda that destroyed vast areas in the Visayas.  Pope Francis visited the Philippines in 2015 mainly to express his closeness with the people of Visayas.  The following year the Philippines hosted the 51st International Eucharistic Congress in Cebu.

Looking back at the four year, the 56-year old archbishop recalled many lessons he learned which he would always keep as "treasures of my heart”.    He is concluding his term amidst a spate of challenges facing the Church and the nations, among them extrajudicial killings in the war on drugs, an islamist insurgency in the south, the need for ethical standards in social media and political engagement.

As of Saturday, 85 bishops — 74 active, five diocesan administrators and six retired — attended the opening of the plenary assembly.  The CBCP is currently composed of 131 members— 83 of them are active, five are administrators, and 43 are retired from 86 ecclesiastical jurisdictions. (Source: CBCPNews)