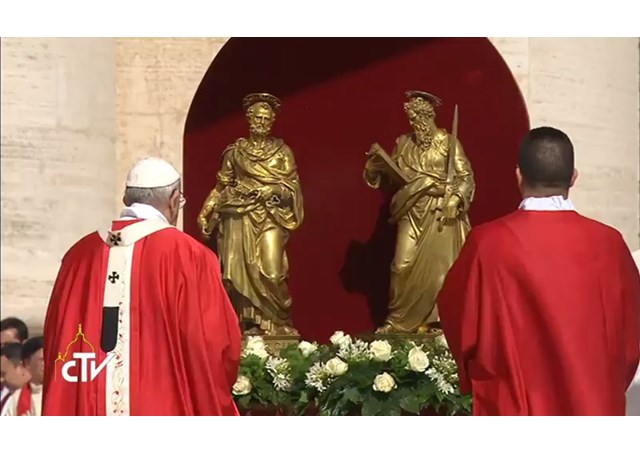 (Vatican Radio) Pope Francis celebrated Mass in St Peter's Square on Thursday to celebrated the feast of Saints Peter and Paul highlighting the plight of persecuted Christians, the importance of prayer and confessing the faith.

In a sunny St Peter’s Square on Thursday, Pope Francis was joined by new Cardinals and Metropolitan Archbishops created in the last year, as well as pilgrims and Romans alike, to celebrate the Solemnity of Saints Peter and Paul, Co-Patrons of the eternal city.

Following a blessing of the Pallium which will be placed on the 36 Metropolitan Archbishops in their own dioceses, the Pope in his homily focused his attention on three words, confession, persecution and prayer, which he said, “are essential for the life of an apostle.”

Beginning with the word confession, the Holy Father referred to the day’s readings in which Jesus asks  “Who do men say that the Son of man is?” Pope Francis explained that the Lord puts the decisive question to his disciples, saying  “But you, who do you say that I am?”

Today, Pope Francis went on to say, “Jesus puts this crucial question to us, to each of us, and particularly to those of us who are pastors, adding, It does not allow for a non-committal answer, because it brings into play our entire life.”

To confess the faith, the Holy Father said, “means this: to acknowledge in Jesus the long-awaited Messiah, the living God, the Lord of our lives.”

Speaking about the second word, persecution, the Pope noted how Peter and Paul shed their blood for Christ, He went on to say that,  “today too, in various parts of the world, sometimes in silence – often a complicit silence – great numbers of Christians are marginalized,… subjected to violence and even death, not infrequently without due intervention on the part of those who could defend their sacrosanct rights.”

Finally, reflecting on the third word, that of prayer, Pope Francis described it as “the water needed to nurture hope and increase fidelity.”

The Lord answers our prayers, he said,  “He is faithful to the love we have professed for him, and he stands beside us at times of trial.”