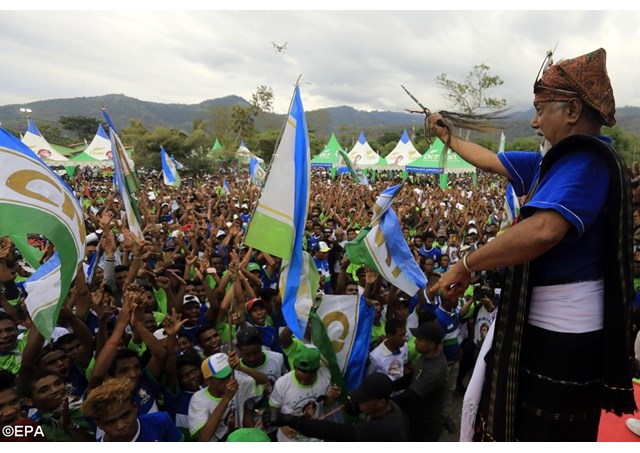 As political parties in Timor-Leste or East Timor are in the midst of a campaign for next month parliamentary elections, the Catholic Church in Asia’s youngest nation is urging them to ramp up their efforts in reducing poverty and improving the lives of people. Twenty-one parties are vying with one another for 65 parliamentary seats in the 22 July elections.  The election that kicked off on 20 June will run up to 19 July.

"The most important thing is that political parties take concrete action to improve the lives of today's poor," said Father Herminio Goncalves, chairman of Dili Diocese's Justice and Peace Commission.  While more than 80 percent of people rely on agriculture, there has been no improvement in the sector. A case in point are the rice fields that have dried up because of poor irrigation.

According to the government, poverty in Timor-Leste is decreasing with the national poverty rate having fallen from 50.4 percent in 2007 to 41.8 percent in 2014.  The country's GDP per capita has also improved from US$762.17 in 1999 to US$983.50 in 2015, the last time it was recorded.  However, Church leaders and observers say poverty rate remains high, with many going without electricity or sanitation. Many suffer malnutrition, unemployment and poor education.

"This is a serious problem that needs immediate attention from parties," Father Goncalves said on June 26.  The priest also said the church will continue voicing these concerns throughout the campaign.

With over 95% of its 1.2 million people professing Catholicism, the Church in Timor-Leste has a powerful voice. ‎ The former Portuguese colony was invaded by Indonesia after Portugal withdrew in 1975.  The violence that followed saw up to 200,000 people killed before the Timorese voted for independence in 1999. That was met with further violence. Timor-Leste became the first new sovereign state of the 21st century on 20 May 2002.

According to the International Republican Institute, a U.S.-based nonprofit and nonpartisan organization committed to advancing freedom and democracy worldwide, the Fretilin party and CNRT (National Congress for Timorese Reconstruction) established by Xanana Gusmao in 2007 are the election frontrunners in the elections, followed by the Democratic Party and the newly established People's Liberation Party by former president Taur Matan Ruak.

Former president and CNRT leader, Kay Rala Xanana Gusmao, told thousands of supporters last week that under his leadership there have been many pro-poor programs.  Gusmao said his party has played a crucial role in preserving peace, unity and stability, which are fundamental cornerstones to ensuring the success of development.  "For the next five years, CNRT will focus more on improving the lives of small people, especially in rural areas, to create more job opportunities," he said.    (Source: UCAN)