Pope: Christians need not read horoscopes to foresee the future 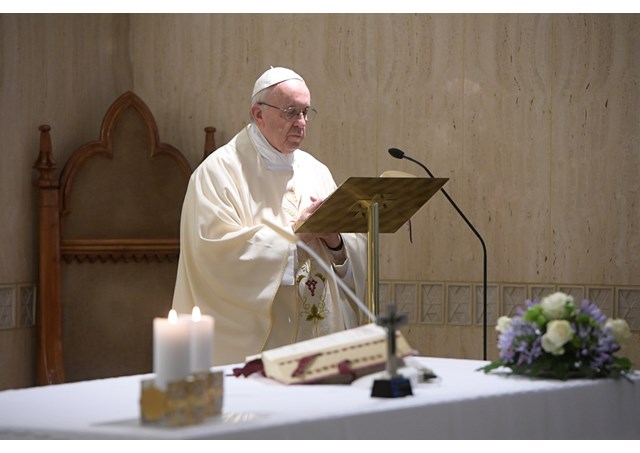 (Vatican Radio) Pope Francis on Monday told believers not to look to horoscopes or to consult fortune-tellers to foresee the future; but to allow God to guide them in a journey full of surprises.

The Pope was speaking during the last Santa Marta Mass of the season before the summer holidays and his return from an apostolic visit to Colombia in September.

Inviting Christians not to be “too settled, stationary, fixed,” Pope Francis reflected on the liturgical reading of the day in which God asks Abraham to leave his country, his homeland, his father’s house and go forth with his kinsfolk, and Abraham – who was seventy five years old – went, as the Lord directed him.

“There is a Christian life-style” the Pope said, “a life-style based on three dimensions: “renunciation”, “promise” and “blessing”.

"To be a Christian always implies this dimension of stripping oneself” of something, it’s a dimension that reflects Jesus’s renunciation on the Cross, he said.

There is always the need to “go forth”, to take a first step and “'leave your land, your family, your father's house.”

The Bible and the Gospels, the Pope said, are full of stories and episodes in which the prophets and the disciples are called to go forth.

Christians, he continued, must a have the “capacity” to be “stripped and to renounce” otherwise they are not “authentic Christians.”

Abraham, he said, obeyed the Lord in faith, and set out for an unknown land to “receive an inheritance.”

A Christian, he said, allows himself to be guided by God who takes us on the path towards the fulfillment of his promise.

“We are men and women who walk towards a promise” he said – the way Abraham walked towards a new land”.

And yet, Francis continued, Abraham did not build a house, he pitched a tent, indicating  that “he was on a journey and trusted God”;  he built an altar “to worship Him” and then he kept on walking: he was always on the go.

The journey of a Christian, the Pope explained, starts anew every morning, trusting in the Lord and open to his many surprises.

He pointed out that at times these surprises are good, at others bad – “think of an illness or of a death” – he said – but we must always be open because we know that He will take us to a safe place, to a land that has been prepared especially for us.

Another trait of the Christian is that he or she always carries a blessing. Christians speak well of the Lord and of others, and ask for God’s blessing to go forward on their paths.

This, the Pope said, is the pattern of our Christian life because everyone, “even lay people, must bless others, speak well of God and of others.”

Too often, he added, we speak badly of our neighbor, “our tongues wag too much” instead of following the order that God gave to “our father” Abraham as a lesson for life:

“That of walking, of letting ourselves be stripped by the Lord, of trusting in his promises and of being irreprehensible” he said.

“Deep down, Francis concluded, Christian life is so simple!”