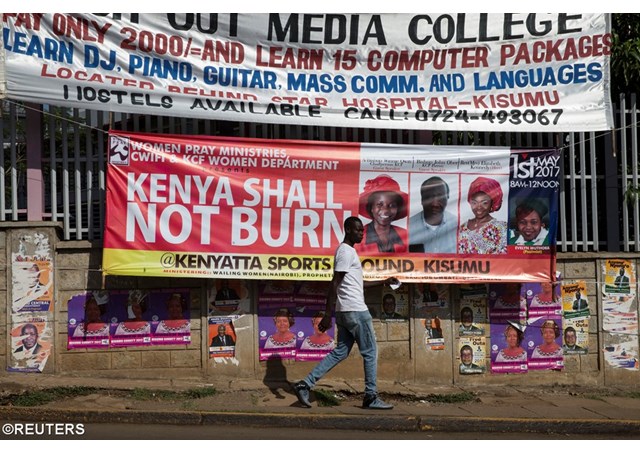 Kenya Catholic Bishops have once again appealed to the country's political leaders and aspirants to conduct themselves peacefully and to ensure that whatever they do is in the interest of Kenyans and promotes peace and unity.

In a pastoral letter issued on 20 June, at Waumini House in Nairobi, the Bishops urged politicians to deists from inflammatory and irresponsible utterances stirring up hatred towards specific candidates. They urged them to instead foster a unified nation by refraining from drumming up of tribal and ethnic sentiments, calling on Kenyans to resist and reject any form of incitement.

The Bishops want Kenyan politicians to conduct themselves with utmost sobriety to ensure that the 2017 General Elections are free, fair, peaceful and credible.

Below is the full pastoral letter by the Bishops

"PEACEFUL AND CREDIBLE ELECTIONS FOR LEADERS OF INTEGRITY2

“Peace be With You” (John 20:20). Time is now for Peaceful and Credible Elections.

1. We, the Catholic Bishops of Kenya in our latest Lenten Campaign message, called upon all Christians and people of good-will to hold  “Peaceful and Credible Elections...” and elect leaders of  integrity.  We have invited our Christ’s faithful to maintain and safeguard peace, calm and non-violence.  All of us, from whatever part of the Country we come from, or whatever political views we hold, are children of God, children of Peace.

2.  We are reminded to do so because, in the Catholic Social Teaching, we are taught that “the human person is the foundation and purpose of political life who is endowed with a rational nature. The human person is responsible for his own choices and able to pursue projects that give meaning to life at the individual and social level.”

3.   The Church further recognizes that the political community originates in the nature of persons who have a religious and moral order that has the greatest validity in the solution of the problems relating to their lives. In addition, we are convinced that the political community finds its authentic dimension in its reference to people: it is and should in practice be the organic and organizing unity of a real people. In common   language,   the   political   leaders   in   our   society   are   a   reflection   of   our society.  The corruption and impunity we are witnessing today in our public and private spheres is just an image in the mirror of who we are as the Kenyan people.

4.  We, the Catholic Bishops of Kenya, are calling and imploring the Kenyan electorate to elect people of integrity since the leadership is at the service of the people. We, therefore, need to critically   assess ourselves. We need to answer this fundamental question: what kind of Kenya do we want?  We know that everybody, with an honest conscience, will want a Kenya free of corruption, negative ethnicity and violence. We need a peaceful and prosperous Kenya.

II. TOWARDS PEACEFUL AND CREDIBLE ELECTIONS

5. We are concerned especially by certain developments we have witnessed during the process of Political Party Nominations that are bound to threaten the very unity and peace of our Country, which we have so passionately defended. We appeal to the Politicians to conduct themselves peacefully and ensure that whatever they do should be in the interest of Kenyans and in particular, to promote unity of the Country.

Concrete points to take into account during electioneering period

a)   On the drumming up of tribal and ethnic sentiments, we must resist and reject any form of incitements. We must foster a unified Nation.

b)   Deists from inflammatory and irresponsible utterances stirring up hatred towards specific candidates.

c)    We condemn the upsurge of elections-related violence among the political leaders.

d)   Reject the agenda of some leaders that is not life friendly, and not family friendly. The defence of life and protection of family unity is paramount and is not negotiable.

e) We must judge each candidate carefully, especially on honesty, truthfulness and integrity. Let us remember that we are entrusting our future and that of our families into their hands.

f)    The Catholic Church has members in almost all Political Parties in Kenya, which is a fruit of democracy. We, as Catholic Bishops, therefore, have no  favourite candidates, but rather our duty is to emphasize the moral values  of political and social life. We implore all Politicians to conduct themselves with utmost sobriety to ensure that the 2017 General Elections are free, fair, peaceful and credible for them to give legitimacy to the electoral offices.

g)       We urge you to go out on the Election Day to vote wisely guided by conscience, after clearly weighing the qualities and the programs proposed by the candidates.

h)      We reiterate that voter bribery is unacceptable.

6. Kenya, like many African Countries, is coming up with new experiences in the domain of governance. This is evident in the management of the public affairs, of citizens, through Institutions set for targeted results; Institutions that make a claim to legitimacy of governance.

The Independent Electoral and Boundaries Commission (IEBC) and other key elections stakeholders should ensure that all the electoral processes are credible, based on compliance to the principles of Article 81 of the Constitution, which states that no more than two-thirds of the members of elective public bodies shall be of the same gender, fair representations of persons with disabilities, universal suffrage based on the aspiration for fair representation and   equality  of  vote;  and   free  and  fair elections,  which  are:-   (i) by   secret ballot, (ii) free from violence, intimidation, improper   influence  or  corruption   (iii) conducted by an  independent body, (iv) transparent and (v) administered in an impartial, neutral, efficient, accurate and accountable manner.

7.    In doing so, the sanctity of “the people” and their entitlement, enshrined in the 2010 Constitution and expressly provided for in the Bill of Rights, which declares itself to be: “an integral part of Kenya’s democratic state and is the framework for social, economic and cultural policies,” will be respected. It is only in doing so that Kenyans will have peaceful and credible elections. The IEBC, therefore, carries the greatest responsibility and must be alive to that.

8. We wish to make a passionate appeal, for sobriety, to give dialogue a chance in order to reach consensus and harmonious resolutions that may embrace different views whenever they occur, of   all   Kenyans   in   all   the   electoral   processes   before,   during   and   after Elections.

IV. THE PRINCIPLE OF DEMOCRACY

9. In his Apostolic Exhortation after the Second Synod of Bishops of Africa, His Holiness Pope Benedict XVI, says that “…Elections represent a platform for the expression of a people’s decisions, and they are a sign of legitimacy for the exercise of power” (Africae Munus, 81).  Further, free and fair “elections provide a privileged   opportunity   for   healthy   and   serene   public political debate, marked by respect for different opinions and different political groupings…’’ (Africae Munus 81). If conducted well, elections  call forth and encourage real and active participation by citizens in political and social life.

11. We, therefore, urge all Kenyans to come out in large numbers after registering as voters to actually ensure that they cast their votes. This will enable them to exercise their democratic rights to vote and together make a decision on how their Country will be governed both at National and at County levels. Once again we appeal to all Kenyans to keep and maintain peace so that we are guaranteed of human integral development and prosperity.

V.   POLITICAL   PARTIES TO RESPECT   AND   PROMOTE THE COMMON GOOD

12. The Catholic Church is aware of the role of political parties in a democratic society.  It is also sadly aware of the role the Political Parties played in the 2007/2008 Post-Election violence. As Shepherds of the people, we would like to remind all Political Parties that they have the task of fostering widespread participation and making public responsibilities accessible to all.  Political Parties are called to interpret the aspirations of civil society, orienting them towards the common good, offering citizens the effective possibility of contributing to the formulation of political choices.  We call   upon all Political Parties to present their Manifestos to the Electorate,   explain   them   and   make   them   available   to   all   people.  Currently, much more interest seems   to be placed on personal political positions rather than on service to the people. We strongly advise that Political Parties follow the provisions of the Political Parties Act 2011, to be national in character, in representation and have internal democratic structures.

13. We, the Catholic Bishops in our Press Statements in 2016, have addressed our concern on entrenched corruption. It is unfortunate that this virus seems to thrive and perpetuate itself without shame or fear. This has taken a big toll on the economy, food security, education, health sector, governance, security, employment and access to basic needs by the vast majority of Kenyans.

14. There  is  little  that  has  been  done  to  prosecute  or  even   recover  the misappropriated   resources  from  those  suspected   or found  to  be  involved.  However, the Government has informed the public that it has recovered some of the looted funds.  The fact is that some of the names mentioned in Public Media have been cleared to contest in elections while some have remained in public offices. These half-hearted actions will yield no fruits.  The tolerance of corruption and letting those considered “untouchable” free to loot the taxpayers’ money for the sake of political expediency, shows how weak our Institutions, Structures and leadership are in the fight against corruption.

15.    In this Pastoral Letter, we have expressed our Pre-Election Concerns. They are not only the concerns of the Catholic Bishops but also the concerns of millions of Kenyan citizens who want peace and credibility of elections in our Country.

We bless all our brothers and sisters and we pray to the Lord that concern for peace and the common good may prevail over any kind of violence prompted by personal or ethnical ambitions during and after the elections.

As we all look forward to the forth-coming elections, we assure you our continuous prayers and moral guidance.

May God bless you all and bless our Country Kenya.