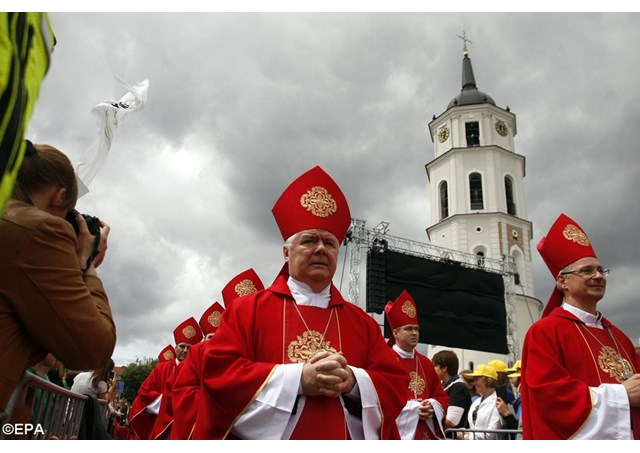 (Vatican Radio) Thousands of people have gathered in Lithuania's capital Vilnius to attend the official beatification ceremony of Archbishop Teofilius Matulionis, whom - as Stefan Bos reports - became a symbol of persecution endured by Christians when the country was still part of the Soviet Union.

They gathered while Pope Francis called to pay respects to Matulionis and the Lithuanian people as the late church leader became the first Catholic martyr from Lithuania's communist era to be declared blessed.

In front of the neo-classical Vilnius Cathedral in the capital, many sang and prayed as they remembered the suffering of a man who spent many years in prisons and labor camps because of his public dedication to Christ and the Church when Lithuania and effectively ruled by atheist leaders in Moscow.

Teofilius Matulionis was eventually executed in 1962 after 16 years in detention.

He was raised to archbishop by Pope John XXIII in 1962. But the archbishop was refused Soviet permission to attend the Second Vatican Council. Soon after, on August 20, 1962, he died from a lethal injection, which was apparently administered by a police nurse of the secret service KGB, following a brutal beating in his apartment.

The sainthood cause launched in 1990 after Lithuania’s independence from Soviet rule. A papal decree on his martyrdom in December 2016 opened the door to his beatification, the penultimate stage in the canonization process.

In a recent pastoral message, the Lithuanian bishops’ conference said Matulionis had “lived the Easter message” referring to his strong faith in the resurrection of Jesus Christ from the dead and salvation for everyone who believes in Him.

The bishops noted that the late Matulionis had in their words consistently shown “peace, confidence, and goodness,” even to his persecutors.

Sunday's beatification was also the highlight of the Ninth National Day of Lithuanian youths in Vilnius of which Matulionis has been declared the Patron Saint. Thousands of young believers gathered around this year's theme taken from the Gospel of John: “truth will set you free”.

The last Lithuanian to be beatified was Bishop Jerzy Matulewicz-Matulaitis, who lived from 1871 to 1927 and was the founder of the Sisters of the Immaculate Conception order. He was declared blessed in Rome by then Pope John Paul II in 1987.

Lithuania's Catholic Church seeks the beatification of Bishop Vincentas Borisevicius, who was shot and killed in 1946 for alleged links with underground fighters, and Archbishop Mecislovas Reinys. He died in a Russian prison in 1953.